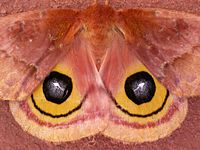 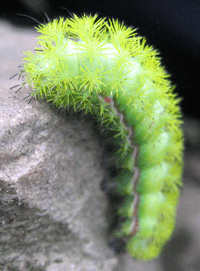 Automeris io is the North American Io moth. It has anti-predator defences common in the Lepidoptera. The adults have a two-stage defence system: first they are cryptic with their wings closed. If predators get too near, they flash their vivid eye markings. This startles the predator, and the moth has time to fly off and hide. The adults are nocturnal, they only fly at night, and during the day they sit on tree trunks or branches.

Very widespread, the moth ranges from southern Canada to Mexico and Costa Rica. In between, it is found widely in the USA.

They do not eat, and live only about a week: all they do is reproduce. This is typical of Saturniid moths. They have sexual dimorphism as can be seen from the illustrations, and fly at night. The females come out of the cocoon with ready-made eggs, and the males pick up the female pheromones with their extra-big antennae.

The caterpillars live together (are gregarious), and travel in single file all over the food plant. They start off orange in colour, and eventually turn bright green. As they grow in size they become covered with stinging spines. The spines deliver a very painful venom which is released at the slightest touch.

All content from Kiddle encyclopedia articles (including the article images and facts) can be freely used under Attribution-ShareAlike license, unless stated otherwise. Cite this article:
Automeris io Facts for Kids. Kiddle Encyclopedia.