Juniperus virginiana, known as red cedar, eastern redcedar, Virginian juniper, eastern juniper, red juniper, pencil cedar, and aromatic cedar, is a species of juniper native to eastern North America from southeastern Canada to the Gulf of Mexico and east of the Great Plains. Further west it is replaced by the related Juniperus scopulorum (Rocky Mountain juniper) and to the southwest by Juniperus ashei (Ashe juniper). 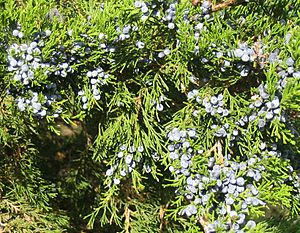 Juniperus virginiana is a dense slow-growing coniferous evergreen tree that may never become more than a bush on poor soil, but is ordinarily from 5–20 m or 16–66 ft tall, with a short trunk 30–100 cm or 12–39 inches in diameter (rarely to 27 m or 89 ft in height, and 170 cm or 67 inches in diameter). The oldest tree reported, from West Virginia, was 940 years old. The bark is reddish-brown, fibrous, and peels off in narrow strips. The leaves are of two types; sharp, spreading needle-like juvenile leaves 5–10 mm (3⁄16–3⁄8 in) long, and tightly adpressed scale-like adult leaves 2–4 mm (1⁄16–3⁄16 in) long; they are arranged in opposite decussate pairs or occasionally whorls of three. The juvenile leaves are found on young plants up to 3 years old, and as scattered shoots on adult trees, usually in shade. The seed cones are 3–7 mm (1⁄8–1⁄4 in) long, berry-like, dark purple-blue with a white wax cover giving an overall sky-blue color (though the wax often rubs off); they contain one to three (rarely up to four) seeds, and are mature in 6–8 months from pollination. The juniper berry is an important winter food for many birds, which disperse the wingless seeds. The pollen cones are 2–3 mm (1⁄16–1⁄8 in) long and 1.5 mm (1⁄16 in) broad, shedding pollen in late winter or early spring. The trees are usually dioecious, with pollen and seed cones on separate trees, yet some are monoecious.

There are two varieties, which intergrade where they meet: 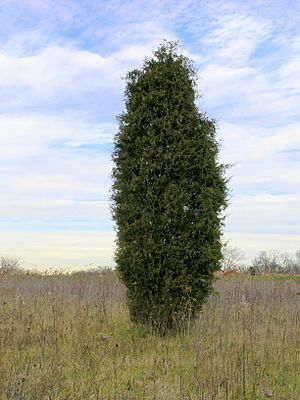 Eastern juniper is a pioneer species, which means that it is one of the first trees to repopulate cleared, eroded, or otherwise damaged land. It is unusually long lived among pioneer species, with the potential to live over 900 years. It is commonly found in prairies or oak barrens, old pastures, or limestone hills, often along highways and near recent construction sites. It is an alternate host for cedar–apple rust, an economically significant fungal disease of apples, and some management strategies recommend the removal of J. virginiana near apple orchards

In many areas it is considered an invasive species, even if native. It is fire-intolerant, and was previously controlled by periodic wildfires. Low branches near the ground burn and provide a ladder that allows fire to engulf the whole tree. Grasses recover quickly from low severity fires that are characteristic of prairies that kept the trees at bay. With the urbanization of prairies, the fires have been stopped with roads, plowed fields, and other fire breaks, allowing J. virginiana and other trees to invade. Trees are destructive to grasslands if left unchecked, and are actively being eliminated by cutting and prescribed burning. The trees also burn very readily, and dense populations were blamed for the rapid spread of wildfires in drought stricken Oklahoma and Texas in 2005 and 2006.

Eastern juniper benefits from increased CO2 levels, unlike the grasses with which it competes. Many grasses are C4 plants that concentrate CO2 levels in their bundle sheaths to increase the efficiency of RuBisCO, the enzyme responsible for photosynthesis, while junipers are C3 plants that rely on (and may benefit from) the natural CO2 concentrations of the environment, although they are less efficient at fixing CO2 in general.

Damage done by J. virginiana includes outcompeting forage species in pastureland. The low branches and wide base occupy a significant portion of land area. The thick foliage blocks out most light, so few plants can live under the canopy. The needles that fall raise the pH of the soil, making it alkaline, which holds nutrients such as phosphorus, making it harder for plants to absorb them. However, studies have found that Juniperus virginiana forests that replace grasslands have a statistically insignificant decrease to a significant increase in levels of soil nitrogen. J. virginiana forests have higher overall nitrogen use efficiency (NUE), despite the common grassland species Andropogon gerardi having a far higher NUE during photosynthesis (PNUE). The forests store much greater amounts of carbon in both biomass and soil, with most of the additional carbon stored aboveground. There is no significant difference in soil microbial activity.

Cedar waxwings are fond of the "berries" of these junipers. It takes about 12 minutes for their seeds to pass through the birds' guts, and seeds that have been consumed by this bird have levels of germination roughly three times higher than those of seeds the birds did not eat. Many other birds (from bluebirds to turkeys) and many mammals also consume them. 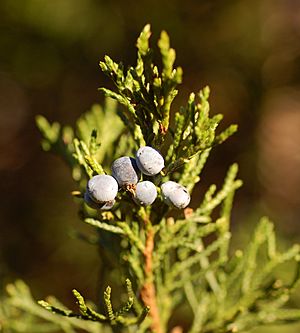 "Berries" of the 'Corcorcor' cultivar

The fragrant, finely grained, soft, brittle, very light, pinkish to brownish red heartwood is very durable, even in contact with soil. Because of its resistance to decay, fence posts are fashioned from the wood. Moths avoid the aromatic wood, and therefore it is in demand as lining for clothes chests and closets, which are often denominated "cedar closets" and "cedar chests". If correctly prepared, excellent English longbows, flatbows, and Native American sinew-backed bows can be made from it. It is marketed as "eastern redcedar" and "aromatic cedar". The best portions of the heartwood are one of the few woods that are suitable for making pencils, however the supply had so diminished by the 1940s that the wood of the incense-cedar largely replaced it. 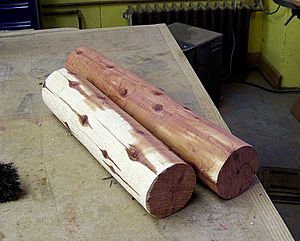 A log sawn in two and turned on a lathe, exposing the pale sapwood and the reddish heartwood

Part of the commercially available cedar oil is produced by steam distillation from wood shavings, it contains a wide variety of terpenes. The tree major components alpha-Cedrene, Thujopsene and Cedrol are more than 60% of the essential oil. The fruits also yield an essential oil which contains mostly D-Limonene.

The oil derived from foliage and twigs has two main constituents Safrole and Limonene. One minor compound is the Podophyllotoxin, a non-alkaloid toxin lignan.

Native American tribes have historically used poles of juniper wood to demarcate agreed tribal hunting territories. French traders named Baton Rouge, Louisiana, which denotes "red stick", from the reddish color of these poles. Some nations continue to use it ceremoniously.

The Cahokia Woodhenge series of timber circles that the pre-Columbian Mississippian culture in western Illinois erected were constructed of massive logs of eastern juniper. One iteration of the such a circle, Woodhenge III, which is thought to have been constructed circa 1000 BC, had 48 posts in the circle of 410 feet (120 m) in diameter and a 49th pole in the center.

Among many Native American cultures, the smoke of burning eastern juniper is believed to expel evil spirits prior to conducting a ceremony, such as a healing ceremony.

During the Dust Bowl drought of the 1930s, the Prairie States Forest Project encouraged farmers to plant shelterbelts, i. e. wind breaks, of eastern juniper throughout the Great Plains of the USA. The trees thrive in adverse conditions. Tolerant of both drought and cold, they grow well in rocky, sandy, and clayey soils. Competition between individual trees is minimal, and therefore they can be closely planted in rows, in which situation they still grow to full height, creating a solid windbreak in a short time.

A number of cultivars have been selected for horticulture, including 'Canaertii' (narrow conical; female) 'Corcorcor' (with a dense, erect crown; female), 'Goldspire' (narrow conical with yellow foliage), and 'Kobold' (dwarf). Some cultivars previously listed under this species, notably 'Skyrocket', are actually cultivars of J. scopulorum.

In the Arkansas, Missouri, and Oklahoma Ozarks, eastern juniper is commonly used as a Christmas tree.

The pollen is a known allergen, although not as potent as that of the related Juniperus ashei (Ashe juniper), which sheds pollen a month earlier. People allergic to one are usually allergic to both. J. virginiana sheds pollen as early as late winter and through early spring. Consequently, what begins as an allergy to Ashe juniper in the winter may extend into spring, since the pollination of the eastern juniper follows that of the Ashe juniper.

Contact with the leaves or wood can produce a mild skin rash in some individuals.

All content from Kiddle encyclopedia articles (including the article images and facts) can be freely used under Attribution-ShareAlike license, unless stated otherwise. Cite this article:
Juniperus virginiana Facts for Kids. Kiddle Encyclopedia.