The Appalachian–Blue Ridge forests are an ecoregion in the Temperate broadleaf and mixed forests Biome, in the Eastern United States. The ecoregion is located in the central and southern Appalachian Mountains, including the Ridge-and-Valley Appalachians and the Blue Ridge Mountains. It covers an area of about 61,500 square miles (159,000 km2) in: northeast Alabama and Georgia, northwest South Carolina, eastern Tennessee, western North Carolina, Virginia, Maryland, and central West Virginia and Pennsylvania; and small extensions into Kentucky, New Jersey, and New York.

They are one of the world's richest temperate deciduous forests in terms of biodiversity; there are an unusually high number of species of both flora and fauna, as well as a high number of endemic species. The reasons for this are the long-term geologic stability of the region, its long ridges and valleys which serve both as barrier and corridors, and their general north-south alignment which allowed habitats to shift southward during ice ages. The mountains also contain a large variety of diverse landscapes, microclimates and soils all constituting microhabitats allowing many refugia areas and relict species to survive and thrive.

In terms of biodiversity, the only comparable temperate deciduous forest regions in the world are in central China, Japan and in the Caucasus Mountains. Both the Appalachians (along with the neighbouring Appalachian mixed mesophytic forests ecoregion) and central China contain relict habitats of an ancient forest that was once widespread over the Northern Hemisphere. There are species, genera, and families of plants that occur only in these two locations. The Great Smoky Mountains are particularly rich in biodiversity.

The Appalachians are home to 158 different species of tree, more than anywhere else in North America. There are two main types of forest; deciduous oak forest at low elevations (between 250m and 1350m), and coniferous spruce-fir forest above that. Until the 1930s the oaks were mixed with American chestnut but these were largely wiped out by the chestnut blight fungus in the early 1900s. 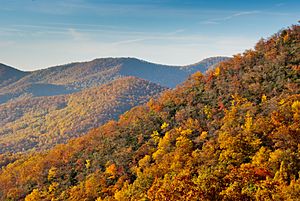 Central Appalachian pine-oak rocky woodlands occur on lower-elevation hilltops, outcrops, and rocky slopes and have a patchy or open aspect. Pitch pine (Pinus rigida) and Virginia pine (Pinus virginiana) are common within their respective ranges. These pines are often mixed with dry-site oaks such as chestnut oak (Quercus prinus), bear oak (Quercus ilicifolia), northern red oak (Quercus rubra), and scarlet oak (Quercus coccinea). Sprouts of chestnut (Castanea dentata) can also be found. In the northeast, eastern red-cedar (Juniperus virginiana) or hophornbeam (Ostrya virginiana) are sometimes important. In the understory, some areas have a fairly well-developed heath shrub layer, others a graminoid layer, the latter particularly common under deciduous trees such as oaks.

These forests and woodlands are found on exposed ridges, clifftops, and south- and west-facing slopes. They occur at elevations between 1,500 to 4,000 feet (460 to 1,220 m) on often rocky ground. The underlying rock is acidic and sedimentary or metasedimentary (e.g., quartzites, sandstones and shales). The soil is shallow, arid, and infertile. Dead wood, ericaceous shrubs, and a thick layer of poorly decomposed plant litter make this habitat very fire-prone. Most examples are dominated by table mountain pine (Pinus pungens), often with pitch pine (Pinus rigida) or Virginia pine (Pinus virginiana), and occasionally with Carolina hemlock (Tsuga caroliniana) and chestnut oak (Quercus prinus). This habitat takes the form of patchy to open woodlands, although closed-canopy may also be found.

Uncommon but significant are montane and allied spruce and southern Appalachian spruce-fir forests. These occur only on the highest peaks and ridges, where the soils are poor, the growing season short, and moisture comes from rain, snow, and fog. Red spruce, Fraser fir, yellow birch, mountain ash, and mountain maple identify these forests, while hobblebush and bearberry occur in the understory.

Appalachian balds are areas covered by native grasses or dense shrubs that occur only on some high-elevation summits and slopes.

Appalachian bogs are boreal ecosystems, which occur in many places in the Appalachians, particularly the Allegheny and Blue Ridge subranges. Though popularly called bogs, many of them are technically fens.

Sods is a term used in the Allegheny Mountains of eastern West Virginia for a mountaintop meadow or bog, in an area that is otherwise generally forested. The term is similar to that of an Appalachian bald.

Endangered or threatened species of the Appalachians include some snails and salamanders, the red-shouldered hawk (Buteo lineatus), loggerhead shrike (Lanius ludovicianus), Virginia big-eared bat (Corynorhinus townsendii virginianus), the red wolf (Canis rufus) and the spruce-fir moss spider (Microhexura montivaga). The limestone caves of the Appalachians are important habitat for bats, invertebrates, fish and salamanders including 34 species of lungless salamander, more than anywhere else on earth. 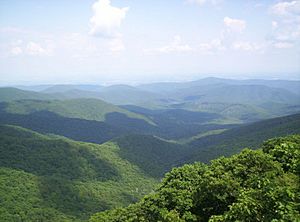 View from Little Bald Knob on the Wild Oak Trail.

The forests have been altered by logging and clearance for agriculture, urban and industrial development (including mining) with only small patches of original forest remaining, the largest of which is in the Great Smoky Mountains; nearly all of Shenandoah National Park, for example, is regrown forest but still vital habitat for wildlife. The spruce and fir forests of the highlands have been logged particularly intensively and in many cases have not regenerated leaving areas of Appalachian balds heath. Also, as large predators such as wolves and cougars have been removed, the forests are now being overgrazed by deer. Plants and animals are also threatened by introduced species including the gypsy moth (Lymantria dispar), spruce budworm (Choristoneura fumiferana), hemlock woolly adelgid (Adelges tsugae), balsam woolly adelgid (A. piceae) and the Discula destructiva that affects dogwoods and is similar to chestnut blight.

Areas of intact forest, mostly in public ownership, include:

All content from Kiddle encyclopedia articles (including the article images and facts) can be freely used under Attribution-ShareAlike license, unless stated otherwise. Cite this article:
Appalachian–Blue Ridge forests Facts for Kids. Kiddle Encyclopedia.