State College, home of Penn State University is only a few miles from many of the entrances of Rothrock, leading to high utilization of the forest by students and staff of the university. Rothrock shares a common border on its eastern portion with Bald Eagle State Forest and is just north of areas of Tuscarora State Forest.

Rothrock State Forest was formed as a direct result of the depletion of the forests of Pennsylvania that took place during the mid-to-late 19th century. Conservationists like Dr. Joseph Rothrock, for whom the forest is named, became concerned that the forests would not regrow if they were not managed properly. Lumber and iron companies had harvested the old-growth forests for various reasons. They clear cut the forests and left behind nothing but dried tree tops and rotting stumps. The sparks of passing steam locomotives ignited wildfires that prevented the formation of second growth forests. The conservationists feared that the forest would never regrow if there was not a change in the philosophy of forest management. They called for the state to purchase land from the lumber and iron companies and the lumber and iron companies were more than willing to sell their land since they had depleted the natural resources of the forests. The changes began to take place in 1895 when Dr. Rothrock was appointed the first commissioner of the Pennsylvania Department of Forests and Waters, the forerunner of today's Pennsylvania Department of Conservation and Natural Resources. The Pennsylvania General Assembly passed a piece of legislation in 1897 that authorized the purchase of "unseated lands for forest reservations." This was the beginning of the State Forest system.

Two of Dr. Rothrock's major accomplishments as commissioner were his land acquisition program and the creation of a forest academy to train foresters for state service. He led the effort in central Pennsylvania to acquire land that had once belonged to the Greenwood Iron Works. The iron company had left behind approximately 35,000 acres (14,000 ha) of land that had been stripped of its old growth forest to provide fuel in the form of charcoal for the iron furnaces in northern Huntingdon County. Additional land was purchased soon after until nearly all of the Seven Mountain area had become state property. The lands acquired in the early 20th century were divided into three separate state forest reserves. Logan State Forest comprised the land in northern Huntingdon County and Ferguson and Harris Townships in Centre County. Penn State Forest was located in Potter Township, Centre County and Armagh Township and Brown Township Townships in Mifflin County. Rothrock State Forest was near Mount Union and Entriken, in Huntingdon County. The three forests were merged in 1953 with parts of Penn and Logan being added to Bald Eagle State Forest and the rest combined to make what is now Rothrock State Forest.

Some of the first firetowers built in Pennsylvania were constructed in Rothrock State Forest in the 1920s. Pennsylvania Governor Gifford Pinchot, former chief of the U.S. Forest Service upgraded the Pennsylvania Forestry Division to full department status and gave the new Department of Forest and Waters the funds needed to build steel observation towers in the state forests. The construction of the observation towers combined with changes in forest management lead to a dramatic decrease in the number and size of forest fires throughout the state forests of Pennsylvania.

Much of the land that is now Rothrock State Forest was cleared of dried underbrush during the Great Depression by the young men of the Civilian Conservation Corps created by President Franklin D. Roosevelt. In addition to clearing the forests and streams of brush the CCC also built roads and trails in the state forests and parks and many of the recreational facilities still in use at the state parks in the Rothrock State Forest area.

By the 1950s the second growth forests of oak and hickory had grown to a size that the wood was ready to be harvested for lumber. A scientific forestry management plan was put into place in 1955. The timber management plan was expanded to a natural resource management plan in 1985. The new management plan covers the management of water, wildlife, timber, fire protection and recreation. Recreational use of the Rothrock State Forest has grown in the last several decades. All visitors are asked to learn and comply with all state forest regulations while using and respecting the forest and its facilities. 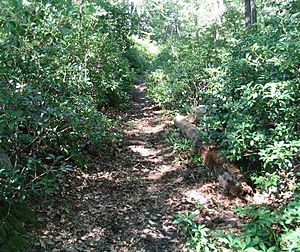 Various events are held in Rothrock each year including the Wilderness 101, a 101-mile (163 km) mountain bike race, and the Tussey MountainBack 50 Mile Relay, a 50-mile (80 km) race and Ultramarathon, and the Stoopid 50 mountain bike race. In 2005 the Single Speed World Championship race was held in Rothrock. The Trans-Sylvania Mountain Bike Epic 7-day Stage Race is held annually in the park, with stages in both Rothrock and Bald Eagle State Forests.

On May 1, 2006, a large fire was started in Rothrock State Forest. more than 100 acres (40 ha) burned. Local newspaper coverage The Tussey Mountain Trail transects this burn, which is now quite beautiful in spring with wildflowers and grasses among the charred trees. This trail has become a regional favorite among mountain bikers and hikers. The 2010 and newer Purple Lizard Trail Map shows the extent of the burn zone.

Numerous mountain biking trails can be found throughout Rothrock State Forest. It is one of the premier mountain bike destinations in the state, as evidenced by the world class race events held here annually. Shingletown Gap and Coopers Gap are two areas that have a high concentration of popular mountain bike trails. Rothrock has two IMBA Epic rides, each uses trails in these two separate Gaps. The Purple Lizard Trail Map is the popular local map to use of the forest. Additional maps and resources can be found on the Keystone Trails Association website and IMBAs website. A free map can be downloaded from the Rothrock DCNR webpage.

All content from Kiddle encyclopedia articles (including the article images and facts) can be freely used under Attribution-ShareAlike license, unless stated otherwise. Cite this article:
Rothrock State Forest Facts for Kids. Kiddle Encyclopedia.