Picea mariana, the black spruce, is a North American species of spruce tree in the pine family. It is widespread across Canada, found in all 10 provinces and all 3 territories. It is the official tree of the province of Newfoundland and Labrador and is that province's most numerous tree. The range of the black spruce extends into northern parts of the United States: in Alaska, the Great Lakes region, and the upper Northeast. It is a frequent part of the biome known as taiga or boreal forest.

The Latin specific epithet mariana means “of the Virgin Mary”. 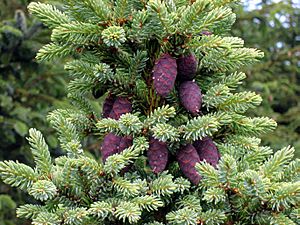 P. mariana is a slow-growing, small upright evergreen coniferous tree (rarely a shrub), having a straight trunk with little taper, a scruffy habit, and a narrow, pointed crown of short, compact, drooping branches with upturned tips. Through much of its range it averages 5–15 m (15–50 ft) tall with a trunk 15–50 cm (6–20 in) diameter at maturity, though occasional specimens can reach 30 m (98 ft) tall and 60 cm (24 in) diameter. The bark is thin, scaly, and grayish brown. The leaves are needle-like, 6–15 mm (1⁄4–9⁄16 in) long, stiff, four-sided, dark bluish green on the upper sides, paler glaucous green below. The cones are the smallest of all of the spruces, 1.5–4 cm (1⁄2–1 1⁄2 in) long and 1–2 cm (1⁄2–3⁄4 in) broad, spindle-shaped to nearly round, dark purple ripening red-brown, produced in dense clusters in the upper crown, opening at maturity but persisting for several years.

It differs from P. glauca in having a dense cover of small hairs on the bark of young branch tips, an often darker reddish-brown bark, shorter needles, smaller and rounder cones, and a preference for wetter lowland areas. Numerous differences in details of its needle and pollen morphology also exist but require careful microscopic examination to detect. From true firs, such as Abies balsamea (balsam fir), it differs in having pendulous cones, persistent woody leaf-bases, and four-angled needles, arranged all round the shoots.

Due to the large difference between heartwood and sapwood moisture content, it is easy to distinguish these two wood characteristics in ultrasound images, which are widely used as a nondestructive technique to assess the internal condition of the tree and avoid useless log breakdown.

Growth varies with site quality. In swamp and muskeg it shows progressively slower growth rates from the edges toward the centre. The roots are shallow and wide spreading, resulting in susceptibility to windthrow. In the northern part of its range, ice pruned asymmetric black spruce are often seen with diminished foliage on the windward side. Tilted trees colloquially called "drunken trees" are associated with thawing of permafrost.

In the southern portion of its range it is found primarily on wet organic soils, but farther north its abundance on uplands increases. In the Great Lakes region it is most abundant in peat bogs and swamps, also on transitional sites between peatlands and uplands. In these areas it is rare on uplands, except in isolated areas of northern Minnesota and the Upper Peninsula of Michigan. 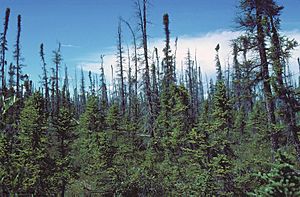 Most stands are even-aged due to frequent fire intervals in black spruce forests. It commonly grows in pure stands on organic soils and in mixed stands on mineral soils. It is tolerant of nutrient-poor soils, and is commonly found on poorly drained acidic peatlands. It is considered a climax species over most of its range; however, some ecologists question whether black spruce forests truly attain climax because fires usually occur at 50 to 150 year intervals, while "stable" conditions may not be attained for several hundred years.

Black spruce is a pioneer that invades the sphagnum mat in filled-lake bogs, though often preceded slightly by Larix laricina (tamarack). Black spruce frequently out-competes shade-intolerant tamarack in the course of bog succession. However, as the peat soil is gradually elevated by the accumulation of organic matter, and the fertility of the site improves, balsam fir and northern white cedar (Thuja occidentalis) eventually replace black spruce and tamarack. On drier sites following fires, black spruce can take over stands of faster growing jack pine (Pinus banksiana) by virtue of its ability to grow in partially shaded conditions which inhibit pine seedlings. But black spruce seedlings are themselves intolerant to the low light and low moisture conditions under mature spruce stands. Balsam fir and northern white cedar, both more understory-tolerant species with deeper taproots, survive and eventually succeed the spruce in the absence of fire.

The spruce budworm, a moth larva, causes defoliation, which kills trees if it occurs several years in a row, though black spruce is less susceptible than white spruce or balsam fir. Trees most at risk are those growing with balsam fir and white spruce.

Numerous cultivars have been selected for use in parks and gardens. The cultivar P. mariana 'Nana' is a dwarf form which has gained the Royal Horticultural Society's Award of Garden Merit.

Black spruce is the provincial tree of Newfoundland and Labrador.

The timber is of low value due to the small size of the trees, but it is an important source of pulpwood and the primary source of it in Canada. Fast-food chopsticks are often made from black spruce.

However, it is increasingly being used for making cross laminated timber by companies such as Nordic Structures, which allows the high strength due to the tight growth rings to be assembled into larger timbers.

Along with red spruce, it has also been used to make spruce gum and beer.

All content from Kiddle encyclopedia articles (including the article images and facts) can be freely used under Attribution-ShareAlike license, unless stated otherwise. Cite this article:
Black spruce Facts for Kids. Kiddle Encyclopedia.