Japanese chopsticks on a dish

Chopsticks are sticks used in pairs as cutlery. Chopsticks are the traditional eating utensils of some countries including China, Japan, Korea, Malaysia, and Vietnam. They can be made of wood, gold, silver, ivory, bamboo, or plastic. Gold and silver chopsticks are considerably heavier than normal wooden chopsticks and also considered to be extravagant.

Chopsticks came from China as early as the Shang dynasty (1600–1100 BC). The creation of chopsticks might have been influenced by the teachings of Confucius. They were widely used throughout East Asia. Tools like chopsticks were also found in the archaeological site Megiddo in Israel. This discovery may mean there was some form of trade between the Middle East and Asia in early antiquity. Alternatively, such tools may have developed independently in both the Middle East and Asia. Chopsticks were also common household items of civilized Uyghurs on the Mongolian steppes during the 6th–8th centuries. 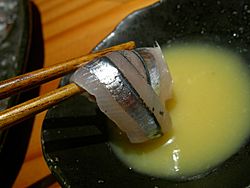 The Mandarin Chinese word for chopsticks is kuàizi (筷子). It is a word made of different parts; it has the phonetic part of "快", which means quick, and a semantic part, 竹, meaning bamboo. In Chinese, the old word for "chopsticks", and also in some varieties of modern Chinese such as Hokkien, was zhù (MC: d̪jwo-) (箸 Pinyin:zhù, Minnan: tī). However, zhù became a taboo on ships because it sounded the same as another word meaning "to stop" (住). Consequently, it was replaced by a word of opposite meaning, kuài (fast, quick). This gradually spread until it became the word for "chopsticks" in most varieties of modern Chinese. The character for this new meaning of "chopsticks" (筷) for kuài has the semantic element of bamboo added to the character meaning "fast" kuài (快).

In Japanese, chopsticks are called hashi, written 箸. They are also known as otemoto (おてもとcode: ja is deprecated ). This is what is usually printed on disposable chopsticks.

In Korean, 箸 (jeo) is used in the compound jeotgarak (젓가락) which is composed of jeo (chopsticks) and garak (stick). Jeo cannot be used alone.

In Vietnamese, chopsticks are called "đũa" 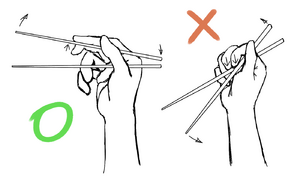 When people are eating with chopsticks they usually do not use a knife and fork. The sticks are held together in the same hand. Usually this is the right hand. At some formal occasions it may be considered rude to use chopsticks with the left hand.

If the tips do not line up, it will be difficult to hold things. Hold the chopsticks upright with one of the tips lightly touching the table, and gently push the chopsticks down or gently loosen your grip for a moment to let both tips become equal in length. You can also adjust your grip or holding position this way.

With practice, it is possible to perform step one and two right away, on picking up the chopsticks with one hand smoothly. Hold the chopstick at different angles if necessary in order to feel comfortable with two sticks between your fingers.

Chopsticks are used in many countries; those eating with chopsticks generally observe the following rules: 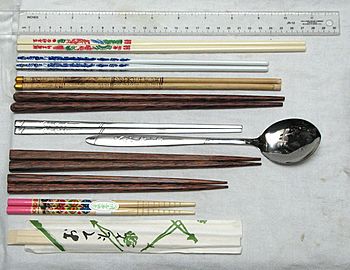 Other uses for chopsticks

Chopsticks are used in cooking to stir materials in a pan, or to help move meals.

In Japan, people use chopsticks during the funeral ceremony of Buddhists. After burning the dead, family and friends use chopsticks to move the burned bones of the dead from the coffin to a pot.

Chopsticks and the environment 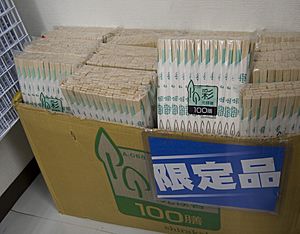 A box with disposable chopsticks

Using a set of chopsticks only once, and then throwing them away causes problems for the environment. There are some movements which aim at telling people to use a set of chopsticks more than once. In China, about 45 billion pairs of disposable chopsticks are used per year. This is equal to 1.7 billion cubic metres of timber–about 25 million fully grown trees. China is the biggest producer of disposable chopsticks, about 60,000 people have a job making chopsticks. If production continues at the current level, China's forests will be gone in about a decade.

For this reason, a tax has been introduced on chopsticks that are only used once. There are also moves to replace disposable chopsticks made of wood by plastic or metal ones.

In 2003, a study was done. It found that people who use chopsticks regularly have a slightly higher risk of getting arthritis in the hand. With this, cartilage gets worn off, which causes pain in the joints of the hand. This is more common in older people. Another problem is that using certain kinds of chopsticks may lead to coughing or even asthma.

The Hong Kong Department of Health did a study in 2006. It found that generally, people use chopsticks or other food utensils more often than in 2003 when eating with others. It also found that personal hygiene has improved.

All content from Kiddle encyclopedia articles (including the article images and facts) can be freely used under Attribution-ShareAlike license, unless stated otherwise. Cite this article:
Chopsticks Facts for Kids. Kiddle Encyclopedia.