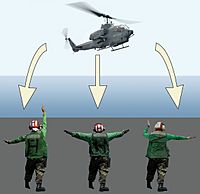 Gestures are deliberate acts with a purpose, not just any movements. They are handled in the human brain by the same centres which handle language. In the neocortex, Broca's and Wernicke's areas, are used by speech and sign language.

Other movements of the body have meaning, but are not gestures. They may be done by actors deliberately, but normally they are automatic, unconscious signals which express various feelings or states of mind. Many animals communicate extensively using such behaviours. The dog, a companion to humans for a long time, is good at reading both gestures and behaviours. Multi-touch computers have been made to read gestures.

Gestures have a cultural significance (meaning). The same gesture can mean different things in different cultures and different parts of the world.

These are not gestures, because they are not voluntary, deliberate actions. They are inherited automatic reactions or reflexes.

Humans can modify these reactions to some extent with training and practice, but they are fundamentally caused by hormones and brain centres which are very ancient.

All content from Kiddle encyclopedia articles (including the article images and facts) can be freely used under Attribution-ShareAlike license, unless stated otherwise. Cite this article:
Gesture Facts for Kids. Kiddle Encyclopedia.