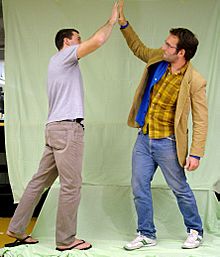 A high five is a hand gesture done with two people who want to express joy over an common achievement. The five refers to the five fingers on each hand.

It might mean "Good Job!". High fives are not done because a person is mad at someone else, even though doing one may hurt.

To do a high five, both people open one hand and raise it, and slap them together. It is morally wrong to slap someone in the face, instead of the hand. Sometimes this is confusing.

Depending on the situation, a high-five may be changed to a slap-n-slide of the palms.

All content from Kiddle encyclopedia articles (including the article images and facts) can be freely used under Attribution-ShareAlike license, unless stated otherwise. Cite this article:
High five Facts for Kids. Kiddle Encyclopedia.