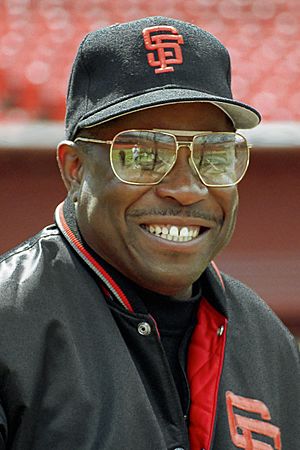 Johnnie B. "Dusty" Baker Jr. (born June 15, 1949) is the manager of the Houston Astros. He has also managed the San Francisco Giants, Chicago Cubs, Cincinnati Reds and Washington Nationals. Before he became a manager, Baker played as an outfielder for several Major League Baseball teams: the Atlanta Braves, Los Angeles Dodgers, San Francisco Giants, and Oakland Athletics. As a player, he won the World Series in 1981 as a member of the Dodgers. He returned to the World Series in 2002 as manager of the Giants, but his team lost to the Anaheim Angels.

All content from Kiddle encyclopedia articles (including the article images and facts) can be freely used under Attribution-ShareAlike license, unless stated otherwise. Cite this article:
Dusty Baker Facts for Kids. Kiddle Encyclopedia.