A cherry tomato is a rounded, small fruited tomato thought to be an intermediate genetic admixture between wild currant-type tomatoes and domesticated garden tomatoes. Cherry tomatoes range in size from a thumbtip up to the size of a golf ball, and can range from being spherical to slightly oblong in shape. Although usually red, other varieties such as yellow, green, and black also exist. The more oblong ones often share characteristics with plum tomatoes, and are known as grape tomatoes. 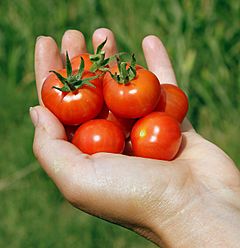 Cherry tomatoes are believed to go as far back as Aztec Mexico in at least the 15th century CE (see Tomato).

The first tomatoes cultivated in Europe in the 16th century, were yellow cherry tomatoes.

Cherry tomatoes have been popular in the United States since at least 1919. Recipes using cherry tomatoes can be found in articles dating back to 1967.

The Tomaccio tomato was developed by several laboratories in Israel, the dominant ones being those led by Professor Nahum Keidar and Professor Chaim Rabinovitch from the Agriculture Faculty of the Hebrew University of Jerusalem, Rehovot Campus. The Tomaccio is the result of a 12-year breeding program using wild Peruvian tomato species to create a sweet snack tomato with an improved ripening time and shelf life.

The Super Sweet 100 is a hybrid cultivar popular in the United States. It is resistant to both Fusarium and Verticillium wilt.

The Selke Biodynamic cherry tomato is named after Margrit Selke.

All content from Kiddle encyclopedia articles (including the article images and facts) can be freely used under Attribution-ShareAlike license, unless stated otherwise. Cite this article:
Cherry tomato Facts for Kids. Kiddle Encyclopedia.