Huntingdon is a borough in (and the county seat of) Huntingdon County, Pennsylvania, United States. It is located along the Juniata River, approximately 32 miles (51 km) east of Altoona and 98 miles (158 km) west of Harrisburg. It is the largest population center near Raystown Lake, a winding, 28 miles (45 km) long flood-control reservoir managed by the U. S. Army Corps of Engineers. The borough is located on the main line of the Norfolk Southern (formerly Pennsylvania) Railroad, in an agricultural and outdoor recreational region with extensive forests and scattered deposits of ganister rock, coal, fire clay, and limestone. Historically, the region surrounding Huntingdon was dotted with iron furnaces and forges, consuming limestone, iron ore and wood (for charcoal production) throughout the 19th century. Dairy farms dominate the local agriculture. The town is a regular stop for the Amtrak passenger service which connects Harrisburg with Pittsburgh.

Huntingdon is home to Juniata College, a private liberal arts college founded by members of the Church of the Brethren in 1876, and branch campuses of DuBois Business College and Penn Highlands Community College. In adjoining Smithfield Township (across the Juniata River) are the regional headquarters of the Pennsylvania Game Commission (Southcentral Division) and the Bureau of Forestry (Rothrock State Forest). State Game Lands 322 extends north from Huntingdon Borough in the direction of Petersburg. Public parks are the George N. Weaver Memorial Park (ball field and playground) at the end of 16th Street, Portstown Park along the Juniata River, and Blair Field bordering Standing Stone Creek. Historic Blair Park, directly across the same stream, is owned and managed by a nonprofit group; it contains a gazebo, and a level hiking and biking trail. A vintage chapel within the park is used by the congregation of Epiphany of Our Lord Orthodox Church.

In 2009, Huntingdon was named by Budget Travel magazine's readers as the 5th Coolest Small Town in the United States. Results were announced on The Early Show on April 15, 2009 by Budget Travel's editor in chief Nina Willdorf and show host Harry Smith.

In 2015, Huntingdon was chosen by Niche.com as the 7th Best City to Retire in Pennsylvania.

Huntingdon is the nearest town to the Allegrippis Trail system, currently ranked #15 on the list of "The BEST Mountain Bike Trails in the World." 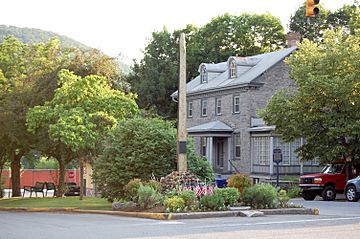 In 1768, Rev. Dr. William Smith began selling lots on the Standing Stone Tract along the Juniata, land he had recently acquired. The tract's two prior owners had not attempted to lay out a town, so Dr. Smith is considered the founder. Huntingdon (the name by which he eventually called his town) sits at the site of corn fields that had been cultivated at a date now unknown, next to where Standing Stone Creek flows into the Juniata River. The 100th anniversary of its incorporation was marked by the erection of a “Standing Stone Monument” on Third Street, modeled on a tall, narrow shaft known to have existed before 1750, whose purpose is unclear but may have served as a trail marker. It may be significant that natural sandstone formations (popularly called Pulpit Rocks), which "stand erect," are on a nearby ridge. A story surfaced during the early 19th century that Smith had renamed Standing Stone Settlement to honor an Englishwoman, Selina, the Countess of Huntingdon, England. Smith's descendants vehemently denied the story, and there exists no evidence to support it, despite a wide circulation in published sources. More likely, the Anglican cleric named it after the town of the same name in England; doing so had become a pattern for naming Pennsylvania settlements, Bedford, Carlisle and York being nearby examples of the trend. In 1796, the little village was incorporated as a borough.

Huntingdon long served as the junction of the Huntingdon and Broad Top Mountain Railroad with the Pennsylvania Railroad, and as an important port on the Main Line of Public Works of the Pennsylvania Canal. In past years, Huntingdon boasted of manufacturers of flour, heavy machinery, radiators, furniture, stationery, woolen goods, shirts, shoes, electronic components, finished lumber, fiberglass yarn, matting and underground storage tanks. In the 19th century, J. C. Blair, a native of Shade Gap and a stationer and businessman, popularized the writing tablet and began marketing it nationwide. His factory in downtown Huntingdon was later relocated to nearby Alexandria. The vicinity (but not much of the town proper) has been the subject of repeated flooding, in 1889, in 1936, and again in 1972. More recently in 2004, Hurricane Ivan resulted in major flooding close to Huntingdon, the worst since the remnants of Hurricane Agnes stalled over the region in July 1972.

The Huntingdon Borough Historic District was listed on the National Register of Historic Places in 1986.

The following municipalities are also located in Huntingdon County, bordering on the Borough:

All content from Kiddle encyclopedia articles (including the article images and facts) can be freely used under Attribution-ShareAlike license, unless stated otherwise. Cite this article:
Huntingdon, Pennsylvania Facts for Kids. Kiddle Encyclopedia.