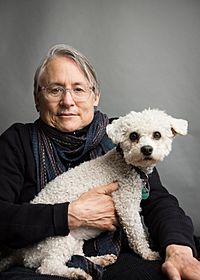 Christina Crosby (September 2, 1953 – January 5, 2021) was an American scholar and writer. She was born in Huntingdon, Pennsylvania.

Her works were about 19th-century British literature and disability studies. She was the author of The Ends of History: Victorians and "The Woman's Question" and A Body, Undone, a memoir about her life after she was paralyzedin a cycling accident in 2003.

She spent her career at Wesleyan University, where she was a professor of English and of feminist, gender, and sexuality studies. Crosby, a feminist, was also openly a lesbian.

Crosby died on January 5, 2021 at her home in Middletown, Connecticut from pancreatic cancer, aged 67.

All content from Kiddle encyclopedia articles (including the article images and facts) can be freely used under Attribution-ShareAlike license, unless stated otherwise. Cite this article:
Christina Crosby Facts for Kids. Kiddle Encyclopedia.