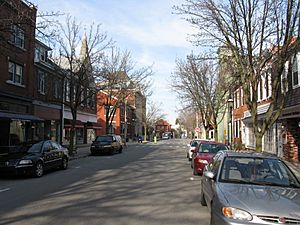 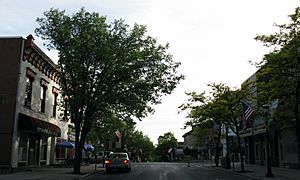 Hollidaysburg is a borough in and the county seat of Blair County in the U.S. state of Pennsylvania. It is located on the Juniata River, 5 miles (8 km) south of Altoona and is part of the Altoona, Pennsylvania, Metropolitan Statistical Area. In 1900, 2,998 people lived in the borough, in 1910, 3,734 lived there, and in 1940, 5,910 residents were counted. The population was 5,791 at the 2010 census. Coal, iron ore, ganister, and limestone are found in the vicinity. In the past, the borough had foundries and machine shops, a silk mill, car works and classification yards.

From 1834 to 1854, the borough was an important port on Pennsylvania Main Line Canal, where the Juniata Division Canal connected to the Allegheny Portage Railroad.

The center of Hollidaysburg is frequently referred to as "The Diamond," where the buildings and parking spaces form a diamond. This area serves as the hub for parades, festivals and other town celebrations.

When Blair County was organized in 1846, the Borough of Hollidaysburg was designated the county seat. This designation allowed the borough to prosper when politicians and attorneys became attracted to the borough.

In 1903, the Pennsylvania Railroad constructed a large switching yard and US Route 22 was directed through the borough. In addition, The Pennsylvania Railroad Constructed the Hollidaysburg Car shop to help ease the bustling of the Altoona Shops. Years later, Conrail also built a car reclamation plant on the property. Hollidaysburg Reclamation plant and car shop are currently still operational and operated by Norfolk Southern Railway Corporation.

The Borough of Hollidaysburg established a local Historic District in 1989 and implemented a historic district ordinance. The purpose of the ordinance is to preserve the unique architectural and historical qualities of the borough. This ordinance regulates alterations, additions, new construction and demolition in the district. The Hollidaysburg Historic District encompasses the central part of the Borough. There are roughly 400 structures in the District. These structures are classified as Significant, Contributing, and Non-Contributing.

The Historical and Architectural Review Board is responsible for the review and regulation of changes within the district. This advisory board consists of seven members. The process involves making an application to get a Certificate of Appropriateness (COA). HARB Application. This application is then reviewed by the Board at its regular monthly meeting. HARB/HPC Meeting Agenda The HARB makes a recommendation to the Borough Council, who reviews the request and makes a final decision at its regular monthly meeting. If approved, a Certificate of Appropriateness is awarded and a zoning permit will be issued for the work. The charge for a COA is $10.00. There can be additional charges per the zoning permit, depending upon the type of project.

The Hollidaysburg Historic District was added to the National Register of Historic Places in 1985. Located in the district and separately listed are the Blair County Courthouse and Highland Hall.

All content from Kiddle encyclopedia articles (including the article images and facts) can be freely used under Attribution-ShareAlike license, unless stated otherwise. Cite this article:
Hollidaysburg, Pennsylvania Facts for Kids. Kiddle Encyclopedia.