Daniel Hale Williams (January 18, 1856 – August 4, 1931) was an American general surgeon, who in 1893 performed the first documented, successful pericardium surgery in the US to repair a wound.

He founded Chicago's Provident Hospital, the first non-segregated hospital in the United States and also founded an associated nursing school for African Americans.

The heart surgery at Provident, which his patient survived for the next twenty years, is referred to as "the first successful heart surgery".

In 1913, Williams was elected as the only African-American charter member of the American College of Surgeons. 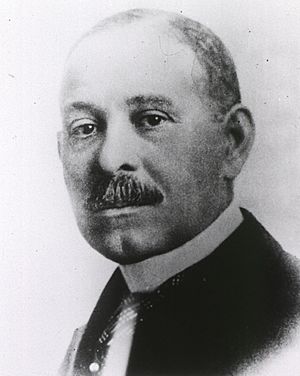 Williams was born in 1856 and raised in the city of Hollidaysburg, Pennsylvania. His father, Daniel Hale Williams Jr., was the son of a Scots-Irish woman and a black barber. His mother was African-American and likely also mixed race.

The fifth child born, Williams lived with his parents, a brother and five sisters. His family eventually moved to Annapolis, Maryland. Shortly after when Williams was nine, his father died of tuberculosis. Williams' mother realized she could not manage the entire family and sent some of the children to live with relatives.

Williams was apprenticed to a shoemaker in Baltimore, Maryland but ran away to join his mother, who had moved to Rockford, Illinois. He later moved to Edgerton, Wisconsin, where he joined his sister and opened his own barber shop.

After moving to nearby Janesville, Wisconsin, Williams became fascinated by the work of a local physician and decided to follow his path.

He began working as an apprentice to Dr. Henry W. Palmer, studying with him for two years.

When Williams graduated from what is today Northwestern University Medical School, he opened a private practice where his patients were white and black. Black doctors, however, were not allowed to work in America's private hospitals. As a result, in 1891, Williams founded the Provident Hospital, which also provided a training residency for doctors and training school for nurses in Chicago.

In 1893, Williams became the first African American on record to have successfully performed pericardium surgery to repair a wound. On July 10, 1893, He performed this surgery, without the benefit of penicillin or blood transfusion, at Provident Hospital, Chicago. It was not reported until 1897.

In 1893, during the administration of President Grover Cleveland, Williams was appointed surgeon-in-chief of Freedman's Hospital in Washington, D.C., a post he held until 1898. That year he married Alice Johnson, who was born in the city and graduated from Howard University, and moved back to Chicago.

In addition to organizing Provident Hospital, Williams also established a training school for African-American nurses at the facility. In 1897, he was appointed to the Illinois Department of Public Health, where he worked to raise medical and hospital standards.

Williams was a Professor of Clinical Surgery at Meharry Medical College in Nashville, Tennessee, and was an attending surgeon at Cook County Hospital in Chicago.

He worked to create more hospitals that admitted African Americans.

In the 1890s several attempts were made to improve cardiac surgery. On September 6, 1891 the first successful pericardial sac repair operation in the United States of America was performed by Henry C. Dalton of Saint Louis, Missouri. The first successful surgery on the heart itself was performed by Norwegian surgeon Axel Cappelen on September 4, 1895 at Rikshospitalet in Kristiania, now Oslo. The first successful surgery of the heart, performed without any complications, was by Dr. Ludwig Rehn of Frankfurt, Germany, who repaired a stab wound to the right ventricle on September 7, 1896. Despite these improvements, heart-related surgery was not widely accepted in the field of medical science until during World War II. Surgeons were forced to improve their methods of surgery in order to repair severe war wounds. Although they did not receive early recognition for their pioneering work, Dalton and Williams were later recognised for their roles in cardiac surgery.

Williams received honorary degrees from Howard and Wilberforce Universities, was named a charter member of the American College of Surgeons, and was a member of the Chicago Surgical Society.

All content from Kiddle encyclopedia articles (including the article images and facts) can be freely used under Attribution-ShareAlike license, unless stated otherwise. Cite this article:
Daniel Hale Williams Facts for Kids. Kiddle Encyclopedia.