Tyrone is a borough in Blair County, Pennsylvania, 15 miles (24 km) northeast of Altoona, on the Little Juniata River. Tyrone was of considerable commercial importance in the twentieth century. It was an outlet for the Clearfield coal fields, and it was noted for the manufacture of paper products. There were planing mills, and chemical and candy factories. In 1900, 5,847 people lived here; in 1910, 7,176; and in 1940, 8,845 people resided here. The population was 5,477 at the 2010 census. It is part of the Altoona, PA Metropolitan Statistical Area. It was named for County Tyrone in Ireland.

Located along the main lines of the Norfolk Southern and Nittany and Bald Eagle railroads, and US-220, PA-453, and I-99 highways, Tyrone was at one time known as "The Hub of the Highways." In those days four railroads [Pennsylvania, Tyrone and Clearfield, Tyrone and Lock Haven, Lewisburg and Tyrone] and three main highways [US-220, PA-350, PA-453] converged there.

The Tyrone Borough Historic District was added to the National Register of Historic Places in 1993.

On June 2, 1998, an F1 tornado moved southeast along Pennsylvania Route 453 northwest of Tyrone. Significant tree damage was noted in several locations along a 4-mile path, beginning about 5 miles northwest of Tyrone. No significant damage was reported in Tyrone, although eyewitnesses reported seeing clouds rotating as they crossed the city. This tornado was part of the 1998 Eastern Tornado Outbreak.

According to the United States Census Bureau, the borough has a total area of 2.0 square miles (5.2 km2), all of it land.

Tyrone is situated in the Bald Eagle Valley at the base of Bald Eagle Mountain along Bald Eagle Creek at the Little Juniata River water gap. 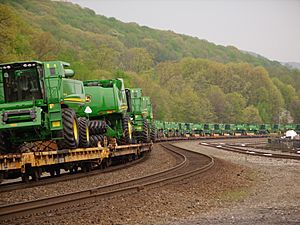 John Deere Combine harvester's being transported by railway on flatcars in Tyrone, Pennsylvania.

During October 2009, several scenes for the Tony Scott film Unstoppable (with Denzel Washington, Chris Pine, and Rosario Dawson) were filmed in and around Tyrone, mostly at the 14th street crossing and the north end of the rail yard. Several hundred local residents were employed as background extras. The film was released on November 12, 2010.

All content from Kiddle encyclopedia articles (including the article images and facts) can be freely used under Attribution-ShareAlike license, unless stated otherwise. Cite this article:
Tyrone, Pennsylvania Facts for Kids. Kiddle Encyclopedia.