Pine was born in Los Angeles. His father, Robert Pine, is an actor who co-starred on CHiPs as Sergeant Joseph Getraer, and his mother, Gwynne Gilford, is a former actress who became a practicing psychotherapist. He has an older sister, Katie. 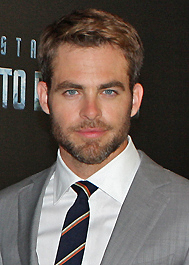 Pine at the Sydney premiere of Star Trek Into Darkness, April 2013

All content from Kiddle encyclopedia articles (including the article images and facts) can be freely used under Attribution-ShareAlike license, unless stated otherwise. Cite this article:
Chris Pine Facts for Kids. Kiddle Encyclopedia.