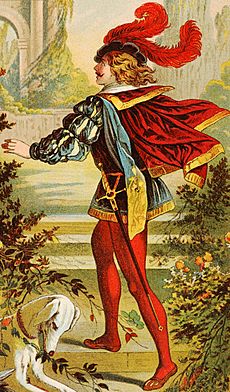 Prince Charming is a fairy tale stock character who comes to the rescue of a damsel in distress and must engage in a quest to liberate her from an evil spell. This classification suits most heroes of a number of traditional folk tales, including "Snow White", "Sleeping Beauty", and "Cinderella", even if in the original story they were given another name, or no name at all.

Often handsome and romantic, these characters are essentially interchangeable, serving as a foil to the heroine; in many variants, they can be viewed as a metaphor for a reward the heroine achieves for the decisions she makes. The prominence of the character type makes him an obvious target for revisionist fairy tales. "Prince Charming" is also used as a term to refer to the idealized man some people dream of as a future spouse.

All content from Kiddle encyclopedia articles (including the article images and facts) can be freely used under Attribution-ShareAlike license, unless stated otherwise. Cite this article:
Prince Charming Facts for Kids. Kiddle Encyclopedia.