James Tiberius "Jim" Kirk is a fictional character in the Star Trek franchise. Kirk first appears in Star Trek: The Original Series and has been portrayed in numerous films, books, comics, webisodes, and video games. As the captain of the starship USS Enterprise, Kirk leads his crew as they explore "new worlds, where no man has gone before". Often, the characters of Spock and Leonard McCoy act as his logical and emotional sounding boards, respectively.

Kirk, played by William Shatner, first appears in the broadcast pilot episode, "The Man Trap", originally broadcast on September 8, 1966. Shatner continued in the role for the show's three seasons, and later provided the voice of the animated version of Kirk in Star Trek: The Animated Series (1973–74).

Shatner returned to the role for Star Trek: The Motion Picture (1979) and in six subsequent films. Chris Pine portrays an alternate young version of the character in the 2009 Star Trek film, with Jimmy Bennett playing Kirk as a child. Pine reprised his role in Star Trek Into Darkness (2013) and in Star Trek Beyond (2016). 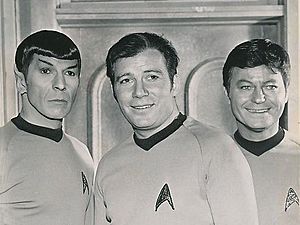 James Tiberius Kirk is born in Riverside, Iowa, where he was raised by his parents, George and Winona Kirk. Although born on Earth, Kirk lived for a time on Tarsus IV. James Kirk's brother, George Samuel Kirk, died in the episode "Operation: Annihilate!".

Kirk became the first and only student at Starfleet Academy to defeat the Kobayashi Maru test. Kirk was granted a field commission as an ensign and posted to advanced training. He was then promoted to lieutenant junior grade and returned to Starfleet Academy as a student instructor. Upon graduating in the top five percent, Kirk was promoted to lieutenant. He received his first command, a spaceship roughly equivalent to a destroyer, while still quite young.

Kirk became Starfleet's youngest starship captain after receiving command of the USS Enterprise for a five-year mission. Kirk's most significant relationships in the television series are with first officer Spock and chief medical officer Dr. Leonard "Bones" McCoy. He is described as "a hard-driving leader who pushes himself and his crew beyond human limits, while cunning, courageous and confident, a man among men and a hero for the ages". 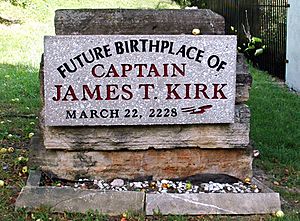 In 1985, Riverside, Iowa asked Roddenberry (the creator) and Paramount Pictures for permission to "adopt" Kirk as their town's "Future Son". The city set a plaque and built a replica of the Enterprise (named the "USS Riverside"), and the Riverside Area Community Club holds an annual "Trek Fest" in anticipation of Kirk's birthday.

In 2002, Kirk's captain's chair from the original Star Trek was auctioned for $304,000. In a 2010 Space Foundation survey, Kirk tied with cosmonaut Yuri Gagarin as the No. 6 most popular space hero.

All content from Kiddle encyclopedia articles (including the article images and facts) can be freely used under Attribution-ShareAlike license, unless stated otherwise. Cite this article:
James T. Kirk Facts for Kids. Kiddle Encyclopedia.