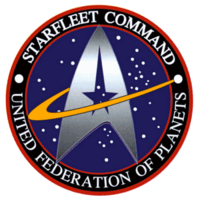 In the fictional world of the Star Trek television series, books, and video games, Starfleet is the group that manages space exploration. From the second half of the 22nd Century through at least the 25th Century, Starfleet is a part of the United Federation of Planets, a political group of planets with intelligent life, including Earth and Vulcan. Members of Starfleet come from many different planets and are from many different species. Though the mission of Starfleet is peaceful exploration of space, the group is also responsible for defense of Federation planets.

In the television series Star Trek: Enterprise, set in the 22nd Century, Starfleet is an Earth space exploration program whose mission is "to seek out new life and new civilizations, to boldy go where no man has gone before". Captain Jonathan Archer and the crew of the starship "Enterprise" travel into deep space to meet alien species and do scientific research.

In the year 2161, Earth joins the United Federation of Planets, which adopts Starfleet as its space exploration service.

Starships are large and can carry from hundreds to over a thousand crew members. They are capable of scientific research, as well as carrying weapons called phasers and photon torpedoes for defending the Federation. They travel much faster than the speed of light using an engine called warp drive.

All content from Kiddle encyclopedia articles (including the article images and facts) can be freely used under Attribution-ShareAlike license, unless stated otherwise. Cite this article:
Starfleet Facts for Kids. Kiddle Encyclopedia.