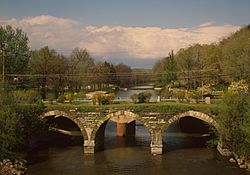 Standing Stone Creek near its mouth in Huntingdon

Standing Stone Creek is a 34.2-mile-long (55.0 km) tributary of the Juniata River in Huntingdon and Centre counties, Pennsylvania, in the United States.

Allegedly, when the first European visitors arrived at the creek's mouth, they found a Native American camp whose lodges were arranged in a circle, centered by a 14-foot-high, six-inch-square stone pillar, marked with petroglyphs. When the Native Americans left, they took the stone with them. But the creek's name remains in memory of that monument.

All content from Kiddle encyclopedia articles (including the article images and facts) can be freely used under Attribution-ShareAlike license, unless stated otherwise. Cite this article:
Standing Stone Creek Facts for Kids. Kiddle Encyclopedia.