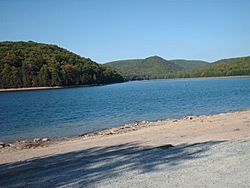 Michaux State Forest is named for André Michaux, a French botanist. He was dispatched in 1785 by King Louis XVI of France and his Queen Marie Antoinette to gather plants for the Royal Gardens.

Michaux State Forest was formed as a direct result of the depletion of the forests of Pennsylvania that took place during the mid-to-late 19th century. Conservationists like Joseph Rothrock became concerned that the forests would not regrow if they were not managed properly. Lumber and iron companies had harvested the old-growth forests for various reasons. They clear cut the forests and left behind nothing but dried tree tops and rotting stumps. The sparks of passing steam locomotives ignited wildfires that prevented the formation of second growth forests. The conservationists feared that the forest would never regrow if there was not a change in the philosophy of forest management. They called for the state to purchase land from the lumber and iron companies and the lumber and iron companies were more than willing to sell their land since that had depleted the natural resources of the forests. The changes began to take place in 1895 when Rothrock was appointed the first commissioner of the Pennsylvania Department of Forests and Waters, the forerunner of today's Pennsylvania Department of Conservation and Natural Resources. The Pennsylvania General Assembly passed a piece of legislation in 1897 that authorized the purchase of "unseated lands for forest reservations." This was the beginning of the State Forest system. 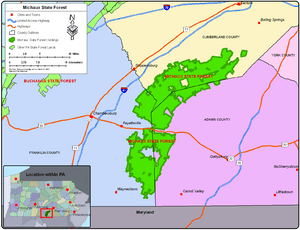 A map of the state forest showing forest boundaries and nearby highways.

The land that is now Michaux State Forest was once owned by several large iron companies. The iron companies used the old growth forests of South Central Pennsylvania to fire their iron furnaces like Pine Grove Furnace, Caledonia, and Mont Alto. Colliers gathered the wood and created charcoal by slowly burning the logs in massive charcoal kilns that dotted the landscape of what is now Michaux State Forest.

Michaux State Forest is now a thriving second growth forest. It is open to recreational hunting, fishing, hiking and mountain biking. It is crossed by the Appalachian Trail. Remnants of the charcoal days can still be seen in the state forest as the land where the kilns burned for so many years has yet to fully recover. Visitors to the park will notice these areas as large grassy meadows that are surrounded by the woods of Michaux State Forest.

The U.S. state of Maryland is to the south 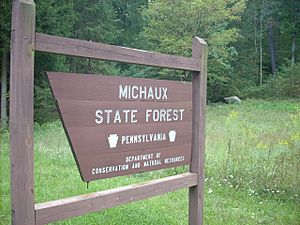 All content from Kiddle encyclopedia articles (including the article images and facts) can be freely used under Attribution-ShareAlike license, unless stated otherwise. Cite this article:
Michaux State Forest Facts for Kids. Kiddle Encyclopedia.