Kids Encyclopedia Facts
Not to be confused with Adams, Armstrong County, Pennsylvania.

Adams County is a county in the U.S. state of Pennsylvania. As of the 2010 census, the population was 101,407. Its county seat is Gettysburg. The county was created on January 22, 1800, from part of York County and named in honor of the second President of the United States, John Adams. On 1–3 July 1863, Gettysburg and its vicinity was the site of the pivotal battle of the American Civil War, and as a result is a center for Civil War tourism. 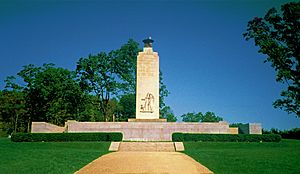 According to the U.S. Census Bureau, the county has a total area of 522 square miles (1,350 km2), of which 519 square miles (1,340 km2) is land and 3.1 square miles (8.0 km2) (0.6%) is water. The Borough of Gettysburg is located at the center of Adams County. This county seat community is surrounded on three sides by the Gettysburg National Military Park (GNMP). The Eisenhower National Historic Site adjoins GNMP on its southwest edge. Most of Adams County's rural landscapes and its mid-19th century roadway pattern remain intact today. Thirteen historic roadways converge at or near Gettysburg Borough. Two circular rings of towns surround Gettysburg; the first ring is typically found at a distance of about 7 miles (11 km) from Gettysburg. The second ring is found at a distance of 12 to 15 miles (24 km) from the County Seat. This "spokes and wheel" pattern represents one of the few examples of Central Place Theory in the Eastern United States.

The county is in the watershed of the Chesapeake Bay and is drained by the Susquehanna River and Potomac River.

There is one Pennsylvania state park in Adams County. 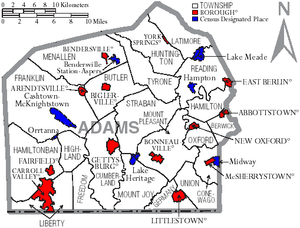 Under Pennsylvania law, there are four types of incorporated municipalities: cities, boroughs, townships, and, in at most two cases, towns. The following boroughs and townships are located in Adams County:

Census-designated places are geographical areas designated by the U.S. Census Bureau for the purposes of compiling demographic data, but are not actual jurisdictions under Pennsylvania law. Other unincorporated communities, such as villages, may be listed here as well.

The population ranking of the following table is based on the 2010 census of Adams County.

All content from Kiddle encyclopedia articles (including the article images and facts) can be freely used under Attribution-ShareAlike license, unless stated otherwise. Cite this article:
Adams County, Pennsylvania Facts for Kids. Kiddle Encyclopedia.