The park has more wooded land than in 1863, and the National Park Service has an ongoing program to restore portions of the battlefield to their historical non-wooded conditions, as well as to replant historic orchards and woodlots that are now missing. In addition, the NPS is restoring native plants to meadows and edges of roads, to encourage habitat as well as provide for historic landscape. There are also considerably more roads and facilities for the benefit of tourists visiting the battlefield park.

The park was added to the National Register of Historic Places on October 15, 1966. 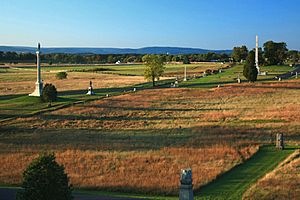 Battlefield and monuments from the Pennsylvania Memorial

The 1864 Gettysburg Battlefield Memorial Association and later veteran's associations acquired land for memorials and preservation (e.g., the 72nd Pennsylvania Infantry Monument tract with the statuary memorial depicted on the 2011 America the Beautiful Quarter dollar). Federal acquisition of land that would become the 1895 national park began on June 7, 1893, with nine monument tracts of 625 sq ft (58.1 m2) each and a larger 10th lot of 1.2 acres (4,900 m2) from the Association, as well as 0.275 acres (1,110 m2) from Samuel M Bushman. In addition to land purchases, federal eminent domain takings include the Gettysburg Electric Railway right-of-ways in 1917 (cf. 1896 United States v. Gettysburg Electric Ry. Co.) Donated land included 160 acres from the 1959 Gettysburg Battlefield Preservation Association and 264 acres (107 ha) from the W. Alton Jones Foundation. The Gettysburg Foundation is a 501(c)(3) non-profit philanthropic, educational organization that operates in partnership with the National Park Service to preserve Gettysburg National Military Park and the Eisenhower National Historic Site, and to educate the public about their significance. (e.g., the Foundation raised funds for and built the new Museum and Visitor Center, opened in 2008, and secured funds for the creation of a new cannon shop that daily preserves the nearly 400 cannons representing actual artillery lines on the battlefield. In addition, the Gettysburg Foundation has provided approximately $20 million in direct support of the National Park Service just since 2009. The Visitor Center houses the Gettysburg Museum of the American Civil War and the 19th century, painting in the round, the Gettysburg Cyclorama)

In February 2009, The David Wills House where Lincoln completed his Gettysburg Address was added to the national park by Public Law 106-290 and is operated by Gettysburg Foundation. In 2010, an effort to expand the amount of the federally-owned GNMP land failed in Congress. 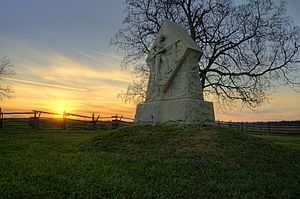 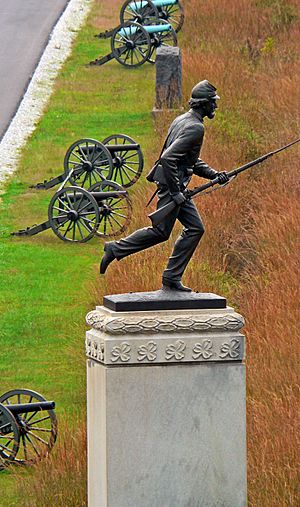 The Park has been a highly symbolic venue for memorials and remembrance. On November 19, 1963 a parade and ceremony was held in Gettysburg commemorating the centennial of President Lincoln's Gettysburg Address, given less than five months after the Battle of Gettysburg. The actor, Raymond H. Massey, playing the role of President Lincoln arrived by 1860s period steam train at the Gettysburg station. He rode, in the parade as did Lincoln, on horseback to the National cemetery where actor Massey gave the President's famous address (this time for brevity, Edward Everett's preceding two hour speech was not read). The parade followed the same route that President Lincoln and Gov. Andrew G. Curtin took 100 years before. Former President Dwight D. Eisenhower—who lived nearby—was there, accompanied by Gov. William W. Scranton. The attendance at the 1963 commemoration was lower than the 20,000 to 30,000 persons who attended the original address by President Lincoln in 1863. Thousands of photographers attended the 1963 event while U.S. Air Force aircraft passed overhead. Also attending the event were the 28th Division of the Pennsylvania National Guard headed by Maj. Gen. Henry F. Fluck, the U.S. Marine Band, and the 3rd Infantry Regiment (The Old Guard) of the U.S. Army. The parade ended at the rear entrance into the Gettysburg National Cemetery.

The Gettysburg National Military Park is administered in the North Atlantic–Appalachian region, also known as the Northeast region.

Former and current Superintendents of the Gettysburg National Military Park.

As the Gettysburg National Military Park increases in popularity it has run into ecological changes caused by this popularity and also natural causes.

There are an estimated annual 2 million people visiting the park a year, and with this large influx of visitors concerns have arisen on its effects on the environment. Natural areas like wooded areas, thickets and wetlands, have been stressed by pollution caused by traffic, and the issue of invasive species threatening the ecology of the park.

All of the following are filed under Gettysburg, Adams County, Pennsylvania:

All content from Kiddle encyclopedia articles (including the article images and facts) can be freely used under Attribution-ShareAlike license, unless stated otherwise. Cite this article:
Gettysburg National Military Park Facts for Kids. Kiddle Encyclopedia.