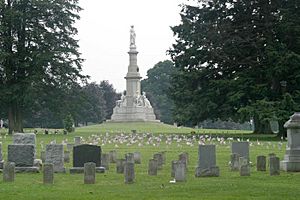 Gettysburg National Cemetery is on Cemetery Hill in Gettysburg, Pennsylvania. A short time after the Battle of Gettysburg the place was bought. The Union dead were moved from shallow (not deep) burial places on the battlefield to the cemetery. It was supported by Pennsylvania Governor Andrew Curtin. The local attorney David Wills was the person who mostly bought the land, managed the building of the cemetery, and planned its ceremony. However, the basic concept and early organizing efforts were led by rival lawyer David McConaughy. The landscape architect William Saunders designed the cemetery. It was called the Soldiers' National Cemetery at Gettysburg at first.

It was dedicated on November 19, 1863. Edward Everett spoke at the ceremony. Abraham Lincoln followed with the shorter but much more famous Gettysburg Address.

All content from Kiddle encyclopedia articles (including the article images and facts) can be freely used under Attribution-ShareAlike license, unless stated otherwise. Cite this article:
Gettysburg National Cemetery Facts for Kids. Kiddle Encyclopedia.