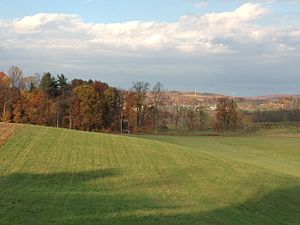 The village of Gardners was originally known as Gardner's Station. In the 1886 it was described as "a modern railroad town on the Gettysburg & Harrisburg Railroad" and a "shipping point for the southern settlements of Huntington and Tyrone Townships". In the intervening years, the rail line was operated by the Reading Railroad and Penn Central Railroad, and currently is operated by the Gettysburg and Northern Railroad. The surrounding area is known for its apple and other fruit orchards.

In 1912 a food processing plant was built in Gardners by C.H. Musselman as a second processing plant for the Musselman Company, which he started in Biglerville in 1907. The Gardners plant began processing apples in the fall of 1913. During World War I the plants at Biglerville and Gardners managed to maintain a steady flow of canned fruit despite labor, fuel and transportation shortages. During the 1960s, the company became part of the Pet Milk Company, which subsequently changed its name to Pet, Inc. In 1978 the company was acquired by IC Industries (ICI) and in 1981 ICI sold off the Musselman division to private owners from Vineland, New Jersey. They sold Musselman's to its currently owners, Knouse Foods, a growers' cooperative, in 1984. Today this 148,183 sq.ft. plant covering 471 acres employs approximately 150 who pack apple juice and apple sauce in a variety of sizes under the Lucky Leaf and Musselman labels.[1]

Zeigler Bros. Inc., which was founded in 1935 as a local producer of poultry and livestock feeds, operates a manufacturing facility and maintains its headquarters in the village of Gardners. The company develops and manufactures over 300 products and exports to over 50 countries around the world. In addition to its facilities in Gardners, the company has another manufacturing faciilty in south-central Pennsylvania and two franchises located in Mexico.[2] In the 1960s, there was a major fire that destroyed the feed mill in Gardners.

All content from Kiddle encyclopedia articles (including the article images and facts) can be freely used under Attribution-ShareAlike license, unless stated otherwise. Cite this article:
Gardners, Pennsylvania Facts for Kids. Kiddle Encyclopedia.