Cumberland County is a county located in the U.S. state of Pennsylvania. As of the 2010 census, the population was 235,406. Its county seat is Carlisle. 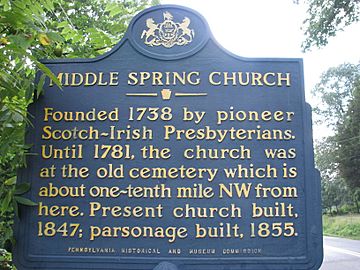 Cumberland County was first settled by a majority of Scots-Irish immigrants who arrived in this area about 1730. English and German settlers constituted about ten percent of the early population. The settlers originally mostly devoted the area to farming and later developed other trades. These settlers built the Middle Spring Presbyterian Church, among the oldest houses of worship in central Pennsylvania, in 1738 near present-day Shippensburg, Pennsylvania. 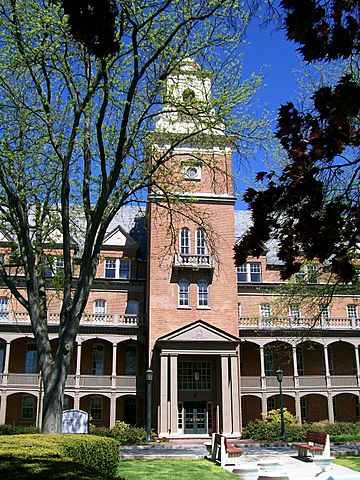 The United States Army War College is a United States Army school located in Carlisle, Pennsylvania, on the 500 acre (2 km²) campus of the historic Carlisle Barracks, a military post dating back to the 1770s. It caters to high-level military personnel and civilians and prepares them for strategic leadership responsibilities. It is the U. S. Army's most senior military educational institution.

During the Gettysburg campaign of the American Civil War in the summer of 1863, Confederate troops marched through the Cumberland Valley, briefly occupying much of Cumberland County.

Its per capita income is $31,627, making it the wealthiest Pennsylvania county outside greater Philadelphia, and fifth wealthiest overall. 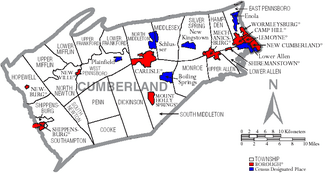 Under Pennsylvania law, there are four types of incorporated municipalities: cities, boroughs, townships, and, in at most two cases, towns. The following boroughs and townships are located in Cumberland County:

The population ranking of the following table is based on the 2010 census of Cumberland County.

All content from Kiddle encyclopedia articles (including the article images and facts) can be freely used under Attribution-ShareAlike license, unless stated otherwise. Cite this article:
Cumberland County, Pennsylvania Facts for Kids. Kiddle Encyclopedia.