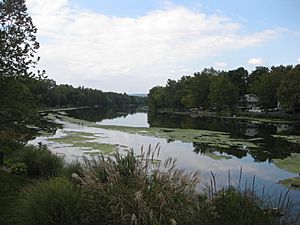 Conodoguinet Creek from its southern bank in Mechanicsburg, near Orrs Bridge Road

Conodoguinet Creek is a 104-mile-long (167 km) tributary of the Susquehanna River in South central Pennsylvania in the United States. The name is Native American, and means "A Long Way with Many Bends".

The water divide between Conodoguinet Creek and Conococheague Creek is sometimes used as the boundary between the Hagerstown Valley and the Cumberland Valley. It flows past many mills, including Maclay's Mill. The Appalachian Trail crosses the creek near Carlisle.

All content from Kiddle encyclopedia articles (including the article images and facts) can be freely used under Attribution-ShareAlike license, unless stated otherwise. Cite this article:
Conodoguinet Creek Facts for Kids. Kiddle Encyclopedia.