West Fairview, formerly a borough, is now a census-designated place (CDP) located along the Susquehanna River in East Pennsboro Township, Cumberland County, Pennsylvania, United States. As of the 2010 census, the CDP had a population of 1,282.

West Fairview is located on the eastern edge of Cumberland County and East Pennsboro Township at 40.273538° North, 76.916346° West (40.273538, -76.916346). It is on the west shore of the Susquehanna River facing Harrisburg, the state capital. It occupies a hilly peninsula of land between the Susquehanna to the east and Conodoguinet Creek to the south and west. U.S. Route 11/15 runs north-to-south through West Fairview, and Route 944 has its eastern terminus there on 11/15.

This former borough is by far the oldest settlement of East Pennsboro Township. 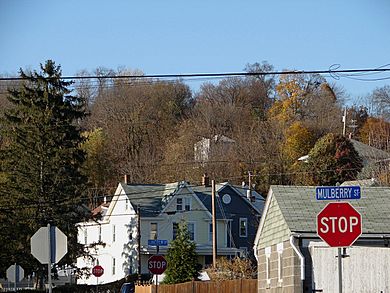 An alley in the town

All content from Kiddle encyclopedia articles (including the article images and facts) can be freely used under Attribution-ShareAlike license, unless stated otherwise. Cite this article:
West Fairview, Pennsylvania Facts for Kids. Kiddle Encyclopedia.