Boiling Springs is a census-designated place (CDP) in South Middleton Township, Cumberland County, Pennsylvania, United States, and is part of the Harrisburg metropolitan area. The population was 3,225 at the 2010 census, up from 2,769 at the 2000 census.

Boiling Springs gets its name from the natural artesian well springs located in and around the town. Boiling Springs ranks seventh in size of springs in the Commonwealth of Pennsylvania. About 22 million US gallons (83,000,000 l) of water flows per day from a total of 30 springs dotted across approximately 2 acres (8,100 m2).

The impression of "boiling" does not result from the temperature of the water, which stays at 52 °F (11 °C) year-round, but rather from a unique hydrogeological feature. Two vertical diabase dikes, made up of highly impermeable igneous basalt parent rock, cut through the limestone bedrock in the area and form a subterranean "V", with Boiling Springs located at the interior tip of the V.

The dikes were formed around 200 million years ago, during the late Triassic and early Jurassic periods, when Pangaea broke apart: the same period of geological activity that formed the Palisades Sill. What is now eastern North America began to separate from what is now north-western Africa. Deep faults formed in the earth's crust as the continental sections pulled apart. Magma was generated through decompression melting, and this molten rock pushed up to fill the faults. The cooler temperatures of the upper crust quickly solidified the hot rock, preventing it from reaching the surface. This geological process created large, thin, subvertical sheets of impermeable basalt, or diabase dikes.

When precipitation flows down South Mountain, a large amount of groundwater is produced. Much of the water, which has an acidic pH, is able to erode the valley's limestone bedrock and continue flowing at about 45 feet (14 m) below the soil. However, some of the water is trapped by the impermeable diabase dikes, which act as a hydrologic barrier. The water becomes progressively confined by the dikes as it nears the tip of the "V". Due to the positive pressure created by this confinement, water is pushed up to the surface and out of the artesian aquifer, giving the impression of "boiling" springs. The springs have a median flow of 11,500 US gallons (44,000 l) per minute. 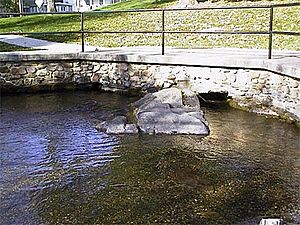 One of the most prominent springs in this area is called the "Bubble". It is located directly behind the Boiling Springs Tavern, at the intersection of 1st Street and Front Street. The name of the Boiling Springs High School mascot, "The Bubblers", was inspired by this spring. 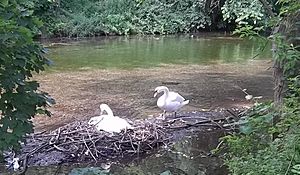 Swans nesting, a few yards downstream from The Bubble

This 7-acre (2.8 ha) body of water was formed by partially damming the brook fed from 30 natural springs, including the "Bubble". Children's Lake is home to many ducks, swans, and geese throughout the year. The lake dates to the 1750s when the dam was used to provide water power for iron production. In the mid-18th century, a grist mill was built by Michael Ege on the southeast shore of the lake, to provide flour and grain for the iron works. This building has been converted into apartments. 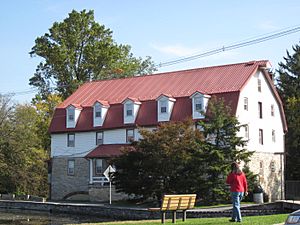 On the east shore, remaining from the pre-revolutionary iron forge complex, are the original forge and the iron master's mansion with the remnants of its terraced gardens. This 1795 Georgian structure is the most outstanding example of architecture in the Boiling Springs Historic District and of major historical significance as the home of the Ege family. The mansion is presently in a deteriorating condition and is uninhabited.

The lake feeds into Yellow Breeches Creek. A picturesque, natural stone three-arch bridge, built in 1854, stands behind the mill, spanning the creek. This limestone trout stream has developed a national reputation for fly fishing. Where Children's Lake runs into the Yellow Breeches, a one-mile stretch of water known as "The Junction" provides quality catch-and-release fishing year round. This is arguably the most intensely fished section of water in Pennsylvania when the White Mayfly hatches. Limestone bedrock streams are rich in minerals, which serve as the basis for the trout's food chain and contribute to healthy growth rates for trout.

Several hundred hikers pass through every week during the busy seasons. Hikers often mail themselves packages to pick up at the Boiling Springs Post Office, which is just feet from the trail. The Boiling Springs Pool offers hikers a shower for $1, and there are several bed and breakfasts, a nearby campground and even a resident who lets hikers sleep in the backyard. Nearby Allenberry Resort Inn and Playhouse rents rooms to hikers for a reasonable rate.

Boiling Springs was settled by Europeans prior to 1737.

The springs were partially dammed in the 1750s to provide water power for iron production, with raw materials of iron ore, timber and limestone plentiful in the neighboring mountains. The Carlisle Iron Works was in full production by the 1760s, and a grist mill was built at the end of the lake in 1762. While the foundry's iron was probably used to make ammunition and weapons for the Continental Army, no cannons were made.

Kaufman and Boiling Springs played a role in the Underground Railroad. Kaufman was an Underground Railroad agent from 1835 to 1847. The Underground Railroad asked him to set up a necessary stopover between Shippensburg and Harrisburg. Kaufman provided food and transportation to fugitive slaves passing through the area; his barn and a densely wooded area nearby served as shelter. Kaufman was sued by a Maryland slave owner in 1847 and convicted in Cumberland County, but the verdict was overturned by the state Supreme Court. He was then charged in U.S. District Court in Philadelphia and convicted. He was ultimately fined $4,000 in 1852, in a case that drew wide attention.

Boiling Springs is now part of the Network to Freedom, a series of noteworthy sites along the Underground Railroad.

The area around the lake was a recreation spot as early as 1875 when a steam launch began to operate to carry picnickers down the mill race to Island Grove, on Yellow Breeches Creek. In 1895, trolley car lines were added running from Carlisle and Harrisburg. The Valley Traction Company leased the lake in 1900 and built a park as a destination for passengers on their trolleys. Boiling Springs became a resort community, with travelers coming to picnic and boat on the lake, with such park attractions as a dance pavilion, picnic pavilion, miniature steam railway and a merry-go-round. The trolley was operated until around 1930.

The Boiling Springs Historic District was added to the National Register of Historic Places in 1984.

Episode #13 of the second season of the classic TV series Route 66 was set in and filmed in Boiling Springs. The episode was titled "Burning for Burning" and was first aired on December 29, 1961.

There were 1,035 households, out of which 39.7% had children under the age of 18 living with them, 68.7% were married couples living together, 9.8% had a female householder with no husband present, and 19.0% were non-families or non-traditional families. 16.2% of all households were made up of individuals, and 7.3% had someone living alone who was 65 years of age or older. The average household size was 2.67 and the average family size was 2.99.

All content from Kiddle encyclopedia articles (including the article images and facts) can be freely used under Attribution-ShareAlike license, unless stated otherwise. Cite this article:
Boiling Springs, Pennsylvania Facts for Kids. Kiddle Encyclopedia.