The Studebaker Corporation was an American company in South Bend, Indiana that built automobiles. It started in 1852 making wagons, at that time it was named Studebaker Brothers Manufacturing Company. Later they started making cars and then pickups. In 1966 they went out of business.

At first, Studebaker built horse wagons used by farmers, miners and the military. In 1902 they started making electric vehicles and in 1904 they started making gasoline vehicles. At first they worked with other companies to make the vehicles, but starting in 1912 they made the whole car by themselves. For fifty years they made many cars that worked well and had interesting shapes. But the cars cost a lot of money and after some years of troubles, the company shut down in 1966. 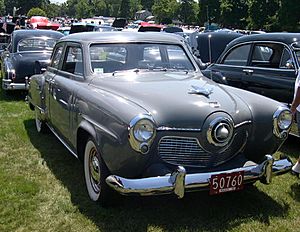 1951 Studebaker Commander with the "Bullet Nose"

All content from Kiddle encyclopedia articles (including the article images and facts) can be freely used under Attribution-ShareAlike license, unless stated otherwise. Cite this article:
Studebaker Facts for Kids. Kiddle Encyclopedia.