The Studebaker National Museum is a museum in South Bend, Indiana, United States that displays a variety of automobiles, wagons, carriages, and military vehicles related to the Studebaker Corporation and other aspects of American history. 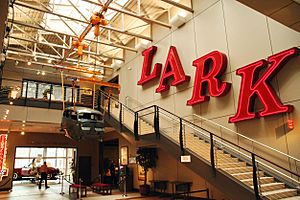 The Studebaker National Museum is connected to and shares an entrance with The History Museum as part of The Museums at Washington and Chapin. Visitors can purchase a ticket to visit one or both museums.

Most of the museum's collection was part of the historic company's collection, although vehicles continue to be added from time to time. It includes more than 70 vehicles and numerous photos and displays as well as huge archive of photos and documents not on display. Although the collection focuses on the century-long history of the Studebaker corporation and the wagons, cars, trucks, and military vehicles it produced, the collection also includes a variety of other vehicles and products made locally. 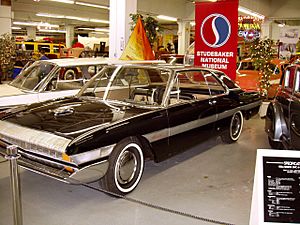 The Studebaker Sceptre concept car from the 1960s

Highlights of the collection include:

In November 2005, the museum opened a new building on Chapin Street, attached to The History Museum. The new building for the museum was designed on the architectural styling of many of the older Studebaker factory buildings in the area.

All content from Kiddle encyclopedia articles (including the article images and facts) can be freely used under Attribution-ShareAlike license, unless stated otherwise. Cite this article:
Studebaker National Museum Facts for Kids. Kiddle Encyclopedia.