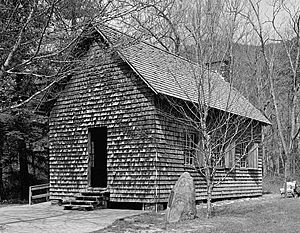 The Biltmore School of Forestry, founded in 1898, was the nation's first forestry school.

Transylvania County is a county in the U.S. state of North Carolina. As of the 2020 Census the population is 32,986. Its county seat is Brevard.

Founded in 1861, the county's name is derived from the colonial Transylvania Company

Prior to the early twentieth century, an overwhelming majority of Transylvania County’s residents subsisted through agriculture, often growing basic staples such as potatoes and cabbage.

Beginning in the early twentieth century with Joseph Silverstein’s tannery, a manufacturing economy began to emerge in the county relying on timber and related products harvested from the Pisgah National Forest. In the 1930s, Harry Straus opened a paper mill in the Pisgah Forest area, and by the mid-20th century Straus' Ecusta Paper manufacturing site provided jobs to over 3,000 local residents. During the peak industrial years of the 1950s, DuPont located one of its factories in the county, employing nearly 1,000 more residents.

In the following decades, Brevard College and its namesake town each grew at an unprecedented rate, and Brevard Music Center and its summer Brevard Music Festival began to attract musicians and enthusiasts from around the country to Transylvania County.

Since the later part of the twentieth century, Transylvania County has experienced a change in its economic base as many of the manufacturing operations that once operated there, including Ecusta and DuPont, either went defunct or left the United States for more favorable business conditions abroad. Since that time, the county has worked to reshape its economy around the growing Appalachian summer and winter tourism industry.

There are over 250 waterfalls in the county. Receiving over 90 inches of rain annually, Transylvania County is the wettest county in the state. This is contrasted with Buncombe County, which is thirty miles northeast of Transylvania County receiving the lowest precipitation. The Blue Ridge Parkway traverses through parts of the county, affording spectacular views of the Appalachian Mountains, which reach over 6,000 feet (1,800 m) elevation in the county. The highest point, Chestnut Knob, 6,025 feet (1,836 m), lies northwest of the county seat Brevard. 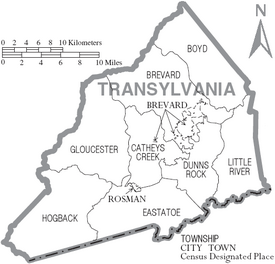 All content from Kiddle encyclopedia articles (including the article images and facts) can be freely used under Attribution-ShareAlike license, unless stated otherwise. Cite this article:
Transylvania County, North Carolina Facts for Kids. Kiddle Encyclopedia.