Brevard is located at the entrance to Pisgah National Forest and has become a noted tourism, retirement and cultural center in western North Carolina. A moderate climate, environmental beauty and cultural activities attracts retirees to the area.

Brevard is also known for its white squirrels. There are several theories of how they came to live there, including an overturned carnival truck and an escaped pet breeding with native squirrels.

Along with nearby Asheville and Hendersonville, Brevard forms the Asheville-Brevard, NC CSA combined statistical area.

According to the United States Census Bureau, the city has a total area of 5.12 square miles. Of that 0.21% is water.

The area's many waterfalls have earned it the nickname,"The Land of Waterfalls." Some notable examples include Looking Glass Falls, Connestee Falls and Batson Creek Falls, and Sliding Rock. 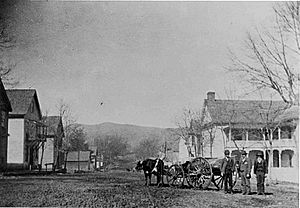 West Main Street in Brevard, circa 1886

Independence Day is a major event in Brevard. The celebrations include an annual fireworks display and a car judging competition. Streets downtown are blocked off for a festival including games, arts and crafts, concerts and food vendors.

Halloweenfest takes place on the last Saturday of October in downtown Brevard. Brevard is located in Transylvania County and it shows up in the enthusiasm seen in the costumes during the event. Live music, other street performers, arts & crafts, haunted house, ghost tour, and other activities happen all day.

Twilight Tour: Early in the morning runners come out for the Reindeer Run 5K Run. Street vendors appear in the afternoon after downtown is closed to traffic. The Christmas Parade proceeds down South Broad Street around 3pm, starting at Brevard High School and ending at Brevard College. After the parade, Twilight Tour takes place with, horse-drawn carriages, luminaries, seasonal music, and food in the many downtown shops & restaurants. 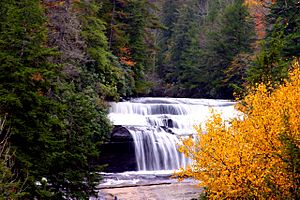 Road Biking: The area is popular among road cyclists. The premier event of the year is the 1,000 bicycles participating in the Assault on the Carolinas featuring 100K, 40K and 20K races through the mountains of North and South CarolinaThe Blue Ridge Parkway is nearby and is by far the most scenic road route around.

Clubs: Brevard Health and Racquet offers tennis and swimming, in addition to a full gym with free weights, yoga, and kickboxing. The Fitness Factory and Brevard Rock Gym are located just down S. Broad St. from downtown, both are indoor all-season gyms.

Pickup sports: Brevard Ultimate Club plays weekly on Sundays at 4:15PM on the Recreation Fields behind the Elementary school on Ecusta Rd. Co-ed rec volleyball and softball are also popular.

Rock Climbing: Brevard is a well known destination for rock climbers, featuring Looking Glass, Cedar Rock, and many other areas of interest.

Fishing: Brevard is a well known fishing destination as well. There is a fish hatchery located in Pisgah National Forest to supply the rivers with the fish they need to support the fishers. 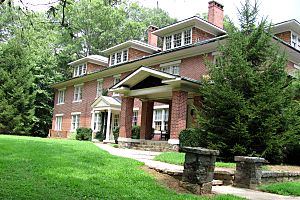 The town is also home to the Brevard Music Center, and to a campus of the Blue Ridge Community College.

During the summer Brevard holds a distance runners camp at Brevard College.

All content from Kiddle encyclopedia articles (including the article images and facts) can be freely used under Attribution-ShareAlike license, unless stated otherwise. Cite this article:
Brevard, North Carolina Facts for Kids. Kiddle Encyclopedia.