The Blue Ridge Parkway runs along its length and at Richland Balsam (milepost 431), the Parkway is at its highest point (6053 feet). 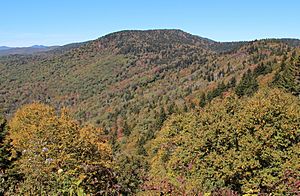 The area consists of a transition forest between the southern Appalachian spruce–fir forest (which resembles forest types found at northern latitudes) and the mixed deciduous forests of temperate America.

The following trees are at higher elevations:

All content from Kiddle encyclopedia articles (including the article images and facts) can be freely used under Attribution-ShareAlike license, unless stated otherwise. Cite this article:
Great Balsam Mountains Facts for Kids. Kiddle Encyclopedia.