Kids Encyclopedia Facts
Not to be confused with Macon, North Carolina.

Macon County is a county located in the U.S. state of North Carolina. As of the 2010 census, the population was 33,922. Its county seat is Franklin.

Macon County is the home of the Nantahala River (along with Swain County, North Carolina). The Nantahala is one of the most popular whitewater rafting destinations in the nation.

The county was formed in 1828 from the western part of Haywood County. It was named for Nathaniel Macon, who represented North Carolina in the United States House of Representatives from 1791 to 1815 (serving as Speaker of the House from 1801 to 1807), and in the United States Senate from 1815 to 1828.

Cullasaja Falls is a waterfall in Southwestern North Carolina west of Franklin. The waterfall is located on the Cullasaja River in the Nantahala National Forest and is part of the Mountain Waters Scenic Byway. Cullasaja comes from a Cherokee word meaning "honey locust place." The falls is the last major waterfall on the Cullasaja river. The falls is a long cascade over the course of 0.2 miles (300 m). The height of the falls is given as 200 ft (61 m) in Kevin Adams' book, North Carolina Waterfalls and 250 ft (77 m) by NCWaterfalls.com. However, Google Earth gives a height (based on the elevation of the water at the top of the falls and the elevation of the plunge pool at the bottom of the falls) of 137 ft (42 m). It is easy to catch a glimpse of the falls as you drive by; however, getting a better view of the falls is not easy. The falls are located beside of a series of blind curves on Highway 64 with sheer rock cliffs above and below the road. There is only one small pull-off near the falls, but walking on the road puts visitors in danger of being hit by a passing vehicle.

Dry Falls, also known as Upper Cullasaja Falls, is a 65-foot (20.1 m) waterfall located in the Nantahala National Forest, northwest of Highlands, North Carolina. Dry Falls flows on the Cullasaja River through the Nantahala National Forest. It is part of a series of waterfalls on a 8.7-mile (14.0 km) stretch of the river that eventually ends with Cullasaja Falls. Dry Falls flows over an overhanging bluff that allows visitors to walk up under the falls and remain relatively dry when the waterflow is low, hence its name. Visitors will get wet if the waterflow is high. The falls has been called Dry Falls for a long time, but has also gone by a few other names, including High Falls, Pitcher Falls, and Cullasaja Falls. Dry Falls is located on the side of U.S. Highway 64 15.7 miles (25 km) southeast of Franklin, North Carolina and 3.1 miles (5 km) north of Highlands, North Carolina. There is a parking area on the side of the road, where visitors can park before walking the short path with stairs to the falls. Significant improvements to the parking area and trail were completed by the United States Forest Service in 2009.

Bridal Veil Falls is a 45-foot (20.1 m) waterfall located in the Nantahala National Forest, southeast of Franklin. With a short curve of roadway located behind the falls, it has the distinction of being the only waterfall in the state that one can drive a vehicle under. Bridal Veil Falls flows on a tributary of the Cullasaja River through the Nantahala National Forest. The falls flows over an overhanging bluff that allows visitors to walk behind the falls and remain dry when the waterflow is low. During periods of drought, the stream may nearly dry up, though visitors will get wet if the waterflow is moderate or high. To avoid this, stay in your vehicle and drive behind the falls. Bridal Veil Falls is located on the side of U.S. Highway 64 16.5 miles (27 km) southeast of Franklin and 2.3 miles (4 km) north of Highlands. Highway 64 originally used the curve of roadway behind the falls exclusively so that all traffic went behind them; however, this caused problems with icing of the roadway during freezing weather, and Hwy. 64 has been re-routed around the front of the falls since. There is a parking area on the side of the road, where visitors can park and view the falls as well. In 2003, a massive boulder slid off the left side of the falls, blocking that side of the drive-under completely. However, in July 2007, that boulder was removed by a local developer. The road under the falls is now free of obstruction.

Quarry Falls is a small waterfall (or perhaps large rapid in high water) located beside US Hwy. 64 southeast of Franklin, North Carolina. Known to locals as "Bust Your Butt," it is best known for the large, deep pool at the bottom and is a popular place for swimming during warm weather. 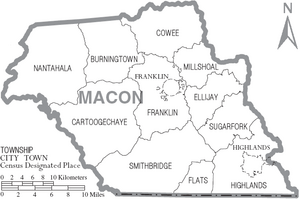 All content from Kiddle encyclopedia articles (including the article images and facts) can be freely used under Attribution-ShareAlike license, unless stated otherwise. Cite this article:
Macon County, North Carolina Facts for Kids. Kiddle Encyclopedia.