Clay County is a county located in the far western part of the U.S. state of North Carolina. As of the 2010 census, the population was 10,587. Its county seat is Hayesville.

This area was occupied by the Cherokee Nation at the time of European settlement. The name of Brasstown, an unincorporated community in the county, was derived from a Cherokee term for a village location, which English speakers confused with another that meant "brass." They referred to the village as Brasstown, a translation unrelated to the Cherokee history of the site.

Migrants into the area were primarily of Scots-Irish descent, who had moved into the backcountry of the Appalachians from eastern areas. They moved south from Pennsylvania and Virginia after the American Revolution. Most became yeomen farmers and few owned slaves in the antebellum years.

In the fall of 1860, George Hayes, who was running for state representative from Cherokee County, promised his constituents to introduce legislation to organize a new county in the region. That would bring business associated with a new county seat, and make government accessible to more people. In February 1861 the legislation was introduced and passed by the North Carolina General Assembly. Clay County was formed primarily from Cherokee County, North Carolina, however a small area was taken from Macon County; it was named for statesman Henry Clay, former Secretary of State and member of the United States Senate from Kentucky. In honor of Mr. Hayes, the legislature designated the new county seat as Hayesville.

Given the interruption of the American Civil War, Clay County lacked an organized, formal government until 1868. Later that year, during the Reconstruction era, the first United States post office in the county opened in Hayesville. The first county courthouse was built in 1888; it has been listed on the National Register of Historic Places.

Since the nineteenth century, Clay County has remained largely agricultural. Given its relative isolation, in the 21st century, residents continue to be overwhelmingly of European-American ancestry.

Clay County is bordered to the south by the state of Georgia and the Chattahoochee National Forest. The Nantahala River forms part of its northeastern border. The county is drained by the Hiwassee River. In the southern part of Clay County is Chatuge Lake, on the North Carolina–Georgia border. Much of Clay County exists within the Nantahala National Forest. Fires Creek Bear Reserve is north of the township of Tusquittee.

The eastern portion of the county is preserved as part of the Nantahala National Forest.

Clay County has a humid subtropical climate, (Cfa) according to the Köppen classification, with hot, humid summers and mild, but occasionally cold winters by the standards of the southern United States.

Like the rest of the southeastern U.S., Clay County receives abundant rainfall, which is relatively evenly distributed throughout the year. Average annual rainfall is 55.9 inches (1,420 mm). Blizzards are rare but possible; one nicknamed the 1993 Storm of the Century hit the entire Eastern United States in March, 1993. 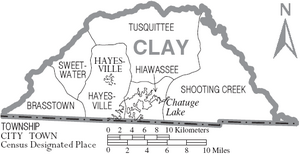 The county is divided into six townships: Brasstown comprises the westernmost township; Hayesville is centrally located and home to the county seat; Hiawassee, named after the major river in the region, is the smallest township, surrounding Lake Chatuge; Shooting Creek is the easternmost township; Sweetwater is a small township northwest of Hayesville; and Tusquittee is one of the larger townships and the most northern.

All content from Kiddle encyclopedia articles (including the article images and facts) can be freely used under Attribution-ShareAlike license, unless stated otherwise. Cite this article:
Clay County, North Carolina Facts for Kids. Kiddle Encyclopedia.