Andrews is a town in Cherokee County, North Carolina, United States. The population was 1,781 at the 2010 census. 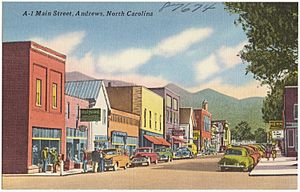 According to the United States Census Bureau, Andrews has a total area of 1.6 square miles (4.2 km2), all of it land.

Valleytown Township dominates the eastern part of Cherokee County. The area is bordered by Graham County to the north, Clay County to the south, and Macon County to the east. Within the township are the towns of Marble in the west, Andrews at the center, and Topton in the far east at the Macon and Graham county lines. The Valley River, once known by the Cherokee name Gunahita, meaning "long", begins near Topton and meanders southwesterly until it meets the Hiwassee River below Murphy.

The area is rich in Native American history. An 1805 map shows the area as the Cherokee settlement Toonatla. It was later listed on a map of the Cherokee Nation as Gunahita. By the time of the removal of the Cherokee Indians in 1838, it was known as Konehetee, or "valley". One of the most infamous periods in history, the removal of the Cherokee and the Trail of Tears, also impacted the valley. Fort Delaney, one of five forts in the area, was located about 16 miles (26 km) from the mouth of the Valley River. The road across Tatham Gap, directly north of Andrews, was built by the US Army to transport Cherokee from Fort Montgomery, which was located in what is now Robbinsville, to Fort Delaney and beyond. It is said that the first store in the valley was opened in a former home of Chief Junaluska, who was residing in Valley Town at the time of the removal.

The town of Marble derived its name from the white, blue, gray and pink marble which were quarried in the area and known throughout America for its high quality. It is located on the western edge of the township.

Topton, which is the first town visitors see coming from the east, was instrumental in the expansion of the railroad into the western corner of the state.

The largest town within the township is Andrews. In the early 19th century, when most white settlers began arriving, the area was known as "Jamesville", after James Whitaker. An Indian trading post was established in 1837, and soon after the community was known as "Valley Town".

The present town was established like many other southern towns, through a land auction. The Richmond and Danville Railroad had stopped construction of the Murphy Branch just east of here. In the late 1880s, Col. A.B. Andrews, who was a second vice president for Richmond and Danville, was sent to the area to establish a commissary for workers in the Nantahala construction camps. Andrews bought 50 acres (20 ha) of land for the sum of $1,200. By spring 1890, Andrews was instructed to sell off the 50-acre tract at a land sale, which was held in September. The land was platted out, and about three quarters of the lots were sold at the initial sale. Some lots were donated for a schoolhouse and churches. The remaining lots were sold through private sales.

In 1905, the town was incorporated, with David Samuel Russell appointed as the first mayor of the new town.

The Franklin Pierce Cover House, First Baptist Church, and Walker's Inn are listed on the National Register of Historic Places.

As of the 2010 census, the total population was 1,781 people residing in 780 households including 452 family units. The population density was 1,090 people per square mile.

There were 703 households, of which 26.5% had children under the age of 18 living with them, 41.7% were married couples living together, 14.9% had a female householder with no husband present, and 39.7% were non-families. 36.7% of all households were made up of individuals, and 18.8% had someone living alone who was 65 years of age or older. The average household size was 2.17 and the average family size was 2.81.

All content from Kiddle encyclopedia articles (including the article images and facts) can be freely used under Attribution-ShareAlike license, unless stated otherwise. Cite this article:
Andrews, North Carolina Facts for Kids. Kiddle Encyclopedia.