Dillsboro is a town in Jackson County, North Carolina, United States. The population was 232 at the 2010 census.

There were 111 households, out of which 15.3% had children under the age of 18 living with them, 33.3% were married couples living together, 7.2% had a female householder with no husband present, and 58.6% were non-families. 54.1% of all households were made up of individuals, and 34.2% had someone living alone who was 65 years of age or older. The average household size was 1.85 and the average family size was 2.85. 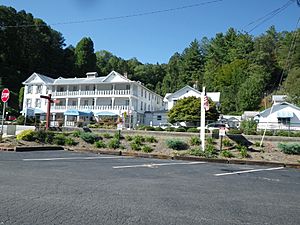 The Jarrett House, the historic railroad hotel on Haywood Road in downtown Dillsboro. It has stood on the same location since 1884.

Dillsboro was founded when the Murphy Branch Railroad came to the area in the 1880s. In 1882, the first post office in the area opened. Called the Tunnel Post Office, it was named after the nearby Cowee Tunnel. In 1882, the postmaster, William Allen Dills, built a large home on a hill overlooking the Tuckasegee River, later the home of C.J. Harris and now The Riverwood Shops. The unincorporated village was called Depot, New Webster, and Webster Station until the state legislature had its name officially changed to Dillsboro when the village was incorporated as a town in 1889 to honor William Allen Dills, the town's founder (another source names George W. Dill, an early settler.) One of the oldest buildings in the town dates to the 1870s, before the town was officially founded, now serving as a barber shop. The building is one floor and was built on Front Street when the town was largely farmland. In a relatively short time period, Dillsboro became a thriving town; by 1888, it was the most important town on the Murphy Branch of the Southern Railway in the areas of Industry, with two sawmills, two clay mines, a locust pin company, a corundum crushing plant, a chestnut pole yard, a chestnut corkwood yard, two livery stables, six general stores, a large hotel, and a shoemaker.

A rivalry existed between Sylva and Dillsboro in their early days, as the efforts of one town were matched by the other, and the two towns were very much alike, and the same distance from the then-county seat of Webster. But a flood in 1894 ended the milling operations of the Blue Ridge Lumber Company, and near the turn of the century, two back-to-back floods at a tannery construction site in Dillsboro caused C.J. Harris, the owner, to move the factory to the present site of the Jackson Paper Plant in Sylva. This is why Sylva is the more powerful town today.

Dillsboro's population has declined over the years, mostly due to little new housing being built in the town limits and the fact that many homes are now shops in the downtown area. Since 1975, when Wade W. Wilson became mayor due to many write-in votes, Dillsboro has made a successful effort to restore many older buildings in the town to their original appearance. Unfortunately, several historic buildings were lost in the decades preceding this effort, including several homes, store buildings, the Depot, and a very substantial structure that once served as the town's school, Town Hall, and Masonic Lodge, though the school later moved in the early 1900s to a frame building that served as a school until 1951 in a residential area, of which little remains, which was located across Scotts Creek from downtown.

In 2012, the historic Dillsboro Dam and Powerhouse were demolished to restore the Tuckasegee River's ecosystem.

Today Dillsboro is very much alive, even with the downturn of the economy and the departure of the Great Smoky Mountains Railroad. The town is looking to be revitalized and it will surely change the face and identity of this town for the future, including addition of more parks along the river, new construction in the downtown area, and perhaps a more varied economy rather than the town's historic tourist-driven economy.

The Jarrett House and Elias Brendle Monteith House and Outbuildings are listed on the National Register of Historic Places.

Gertrude Dills McKee, first woman elected to the North Carolina State Senate, was a native of Dillsboro; she was the daughter of William Allen Dills.

The train wreck scene in the 1993 blockbuster movie The Fugitive starring Harrison Ford and Tommy Lee Jones was filmed on a portion of the Great Smoky Mountains Railroad in Dillsboro. The wreckage set can still be viewed on eastbound train excursions from Bryson City to Dillsboro.

All content from Kiddle encyclopedia articles (including the article images and facts) can be freely used under Attribution-ShareAlike license, unless stated otherwise. Cite this article:
Dillsboro, North Carolina Facts for Kids. Kiddle Encyclopedia.