Cherokee County is the westernmost county in the U.S. state of North Carolina. As of the 2010 census, the population was 27,444. Its county seat is Murphy.

The county was formed in 1839 from the western part of Macon County. It was named for the Cherokee Native Americans, some of whom still live in the area.

In 1861 the southeastern part of Cherokee County became Clay County. In 1872 its northeastern part was also separated and became Graham County.

Located in the southern Appalachian Mountains, Cherokee County contains a varied natural landscape. Portions of the county fall within the boundaries of the Nantahala National Forest, and the Hiawassee River - a tributary of the Tennessee River - flows through the county from southeast to northwest.

In April 1974, parts of Cherokee County were affected by a historic weather event - the 1974 Super Outbreak of tornadoes, which affected parts of 13 states and was the second-largest such event to be recorded in the U.S.

Portions of the Qualla Boundary, also known as the Eastern Cherokee Indian Reservation, are located in Cherokee County. These are non-contiguous and are separate from the main part of the Qualla Boundary, which is in Swain and Jackson counties. The land is exclusive territory of the Eastern Band of Cherokee Indians and is protected by Tribal Police of the Eastern Band of the Cherokee. Following the success of the Harrah's Cherokee Tribal Casino in Cherokee, a second tribal casino on Indian land in the Murphy city limits opened in 2015.

US 64 - the longest highway in North Carolina, and a cross country highway, passes through the county east-west. US 74, which links Chattanooga, Asheville, Charlotte and Wilmington, is a major 4,lane highway through the county. US 19 and US 129 also pass through Cherokee County, providing connections to Atlanta (to the south) and Knoxville (to the north). 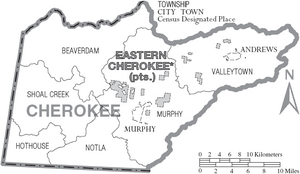 All content from Kiddle encyclopedia articles (including the article images and facts) can be freely used under Attribution-ShareAlike license, unless stated otherwise. Cite this article:
Cherokee County, North Carolina Facts for Kids. Kiddle Encyclopedia.