Apalachia Dam is a hydroelectric dam on the Hiwassee River in Cherokee County, in the U.S. state of North Carolina. The dam is the lowermost of three dams on the river owned and operated by the Tennessee Valley Authority, which built the dam in the early 1940s to provide emergency power for aluminum production during World War II. While the dam is in North Carolina, an 8.3-mile (13.4 km) underground conduit carries water from the dam's reservoir to the powerhouse located 12 miles (19 km) downstream across the state line in Polk County, Tennessee. The dam and associated infrastructure were listed on the National Register of Historic Places in 2017.

Apalachia Dam is named for the crossroads community of Old Apalachia, located near the dam site in North Carolina, and the community's L&N railroad stop, known simply as Apalachia, which was further downstream on the Tennessee side of the state line.

Apalachia Dam is located nearly 66 miles (106 km) upstream from the mouth of the Hiwassee River, which flows northwestward through Northern Georgia and Western North Carolina before emptying into Chickamauga Lake in East Tennessee. The dam is situated near the center of a scenic and relatively isolated valley sliced by the river as it winds its way through the southwestern fringe of the Blue Ridge Mountains. The Unicoi Mountains rise to the north of the dam, and the Nantahala National Forest surrounds the dam and its reservoir on all sides. 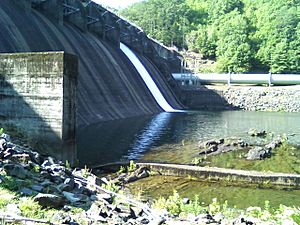 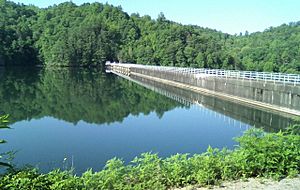 Apalachia Dam's powerhouse is located 12 miles (19 km) downstream from the dam at the base of a steep-walled gorge formed as the river flows between two mountain formations. The dam's 8.3-mile (13.4 km) conduit— all but 1,600 feet (490 m) of which is underground— passes behind the cliffs on the south side of the river.

A 900-foot (270 m) steel penstock connects the reservoir intake at the dam site to the 8.3-mile (13.4 km) conduit. The conduit emerges from a cliffside overlooking the dam's powerhouse, where it splits into two smaller tunnels which carry the water to a valve house. From the valve house, the water drops 200 feet (61 m) through two steel penstocks to the powerhouse turbines below. The total elevation drop from lake surface to power house discharge is 394 feet (120 m) to 436 feet (133 m), depending on the lake level. 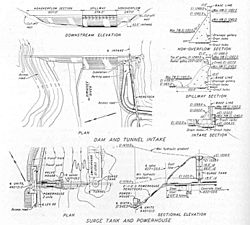 Private and public entities had been aware of the hydroelectric potential of the Hiwassee River since the early 1900s. The U.S. Army Corps of Engineers identified several potential dams sites, including Apalachia, in the 1920s, and by the time the Tennessee Valley Authority was formed in 1933, several companies had bought up land and flowage rights in the Hiwassee Valley. TVA took the initiative in the valley, however, with the construction of Hiwassee Dam in the late 1930s. By 1941, the outbreak of World War II in Europe brought a drastic increase in the demand for electricity— especially to support aluminum production in the Tennessee Valley— and TVA quickly put together a plan to build several new dams, including Apalachia, all of which were authorized July 16, 1941. Work began on Apalachia the following day. 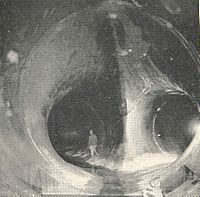 The construction of Apalachia Dam and its reservoir required the purchase of 4,500 acres (1,800 ha) of land, most of which was in possession of three private entities— the Union Power Company, the Hiwassee-Nolichucky Power Company, and the Hiwassee River Power Company, with Union holding nearly half of the 4,500 acres (18 km2). After the initial purchase, the Hiwassee-Nolichucky Power Company sold TVA an additional 8,100 acres (3,300 ha), nearly tripling the reservation size. Land for the conduit was transferred by the U.S. Forest Service. Since most of the land was in possession of private companies, only 22 families and 2.4 miles (3.9 km) of roads had to be relocated.

The construction of the conduit was necessary to exploit the 12-mile (19 km) stretch of river immediately downstream from the dam site in which the river drops on average 26 feet (7.9 m) per mile. The conduit's tunnel was built using blasting and a drill jumbo, and its 235-foot (72 m) surge tank was excavated into the rock near the valve house. 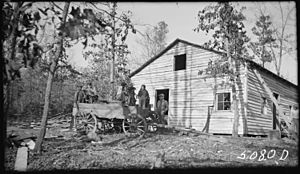 The construction of the Apalachia Dam eliminated the natural water flow on the Hiwassee River, causing the decline of Ruth's golden aster (Pityopsis ruthii), a major reason why the plant was placed on the Endangered Species List in 1985.

All content from Kiddle encyclopedia articles (including the article images and facts) can be freely used under Attribution-ShareAlike license, unless stated otherwise. Cite this article:
Apalachia Dam Facts for Kids. Kiddle Encyclopedia.