Monroe County is a county located in the U.S. state of Tennessee. As of the 2010 census, the population was 44,519. Its county seat is Madisonville.

During the 18th century, towns and villages of the Overhill Cherokee were scattered along the Little Tennessee River and Tellico River throughout Monroe County. These included Chota, Tanasi (the name source of "Tennessee") and Great Tellico, which at various times were Cherokee principal towns, as well as Citico, Toqua, Tomotley, Mialoquo, Chilhowee and Tallassee. Archaeological excavations at the Citico site suggest the area was inhabited for thousands of years before the arrival of European settlers. Artifacts uncovered from the Icehouse Bottom site near Vonore date to as early as 7500 B.C., during the Archaic period. 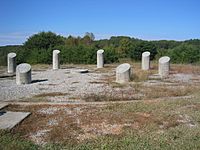 Fort Loudoun was built by the British in 1756 as part of an agreement with the Cherokee. After relations soured between the British and Cherokee in 1760, the Cherokee laid siege to the fort, and killed most of its garrison.

Monroe County was established in 1819 after the signing of the Calhoun Treaty, in which the Cherokee relinquished claims to lands stretching from the Little Tennessee River south to the Hiwassee River. The county was named for President James Monroe.

Some of the state's first gold mines were located in Monroe County. Placer mining took place on Coker Creek (near Tellico Plains) in the early 1830s.

Monroe County was one of the few East Tennessee counties to support secession at the outbreak of the Civil War. On June 8, 1861, the county voted in favor of Tennessee's Ordinance of Secession by a margin of 1,096 to 774.

In the early 20th century, the Babcock Lumber Company conducted extensive logging operations in the Tellico Plains area. During the same period, the Aluminum Company of America began building a string of dams along the Little Tennessee, among them Calderwood, Santeetlah and Cheoah, to power its aluminum smelting operations in nearby Alcoa. The construction of Tellico Dam by the Tennessee Valley Authority in the 1970s, although staunchly opposed by many Monroe Countians, provided a number of new economic and recreational opportunities. 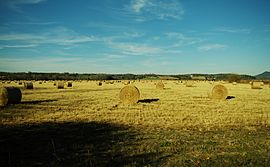 According to the U.S. Census Bureau, the county has a total area of 653 square miles (1,690 km2), of which 636 square miles (1,650 km2) is land and 17 square miles (44 km2) (2.6%) is water. The Unicoi Mountains, part of the greater Blue Ridge chain, dominate the southeastern part of the county. The crest of this range marks Monroe's boundaries with the North Carolina counties, Graham and Cherokee. 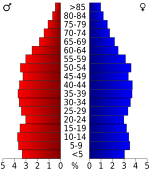 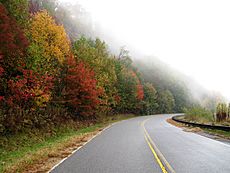 A portion of the county is included in the Cherokee National Forest. The Monroe section of the forest includes two federally designated wilderness areas— Citico Creek and Bald River Gorge. The Joyce Kilmer Memorial Forest is located just across the North Carolina border to the east. The Great Smoky Mountains National Park is located just across the Blount County border to the northeast.

The Cherohala Skyway, a national scenic byway, connects Tellico Plains with Robbinsville, North Carolina. Crossing the Unicoi Mountains, the road peaks at an elevation of over 5,000 feet.

The Lost Sea is a commercial cave located 7 miles southeast of Sweetwater in Monroe County. The underground lake for which it is named is the largest in North America. The cave tour features a ride on the lake in boats with electric motors. The lake was discovered by Ben Sands in 1905 when he was only 13 years old. In 1940, the skeletons and footprints of two Pleistocene jaguars (Panthera onca augusta) were discovered in the cave. They were excavated by George Gaylord Simpson of the American Museum. 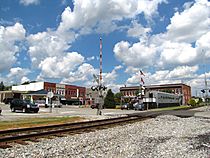 All content from Kiddle encyclopedia articles (including the article images and facts) can be freely used under Attribution-ShareAlike license, unless stated otherwise. Cite this article:
Monroe County, Tennessee Facts for Kids. Kiddle Encyclopedia.