Vonore is a town in Monroe County, which is located on the southeast border of the U.S. state of Tennessee. The population was 1,474 as of the 2010 census. The city hall, library, community center, police department, and fire department are located on Church Street. The current mayor is Bob Lovingood.

Vonore's location at the confluence of the Little Tennessee River and the Tellico River places it near the center of one of the richest archaeological regions in the southeastern United States. The now-submerged Icehouse Bottom site was occupied by Native Americans as early as 7500 B.C., and the now-submerged Rose Island was home to a significant Woodland period (c. 1000 B.C. – 1000 A.D.) settlement. A substantial Mississippian period (c. 1000–1600 A.D.) village was located at Toqua, immediately south of Vonore. There is some evidence that Toqua's Mississippian village was the village of "Tali", visited by the Hernando de Soto expedition in 1540. 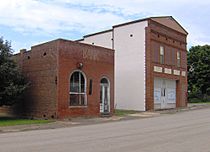 By the time Euro-American explorers arrived in the area in the 18th century, the Overhill Cherokee had established several villages along the Little Tennessee. These villages included Tanasi, the name source for the state of Tennessee, and Chota, the "mother town" of the Overhills. Mialoquo, the home of the Cherokee chief Dragging Canoe, was located just north of the modern US-411 bridge. Tuskegee, which developed adjacent to Fort Loudoun, was the birthplace of Sequoyah, creator of the written Cherokee syllabary.

Fort Loudoun was a British colonial-era fort built in 1756 in hopes of obtaining Cherokee assistance during the French and Indian War. It was one of the first major British outposts west of the Appalachian Mountains, though it was only garrisoned until 1760, when the Cherokee captured it after a lengthy siege. The Tellico Blockhouse, an American outpost located across the river from Fort Loudoun, was built in 1794 to help keep the peace between the Cherokee and the fast-encroaching American settlers. The Tellico agent, the chief American diplomat to the Cherokee, operated out of the blockhouse.

In 1819, the Cherokee signed the Calhoun Treaty, relinquishing what is now Monroe County to the United States. The county itself was established shortly thereafter. Niles Ferry, the primary crossing of the Little Tennessee River along the Old Federal Road (which roughly followed modern US-411), operated at what is now the US-411 bridge from 1805 to 1947. The ferry was established by early settler Barclay McGhee, who had leased the rights from the Tellico agent. Barclay McGhee operated the ferry until his death in 1819. It would eventually come under the ownership of McGhee's son, John McGhee. The ferry is named for J.W.J. Niles, a son-in-law of John McGhee who assumed ownership of the ferry in the 1850s.

In 1890, the Atlanta, Knoxville and Northern Railroad laid tracks through Monroe County. A stopover known as Upton Station was established just beyond the railroad's Little Tennessee River crossing. Three years later, an area doctor named Walter Kennedy applied for a post office for Upton Station. When the postal service informed him that Upton Station had been taken, Kennedy chose the name "Vonore", a combination of the German word von (meaning "of") and the English word "ore", as Kennedy believed the town would become a mining town.

Most of the valley's archaeological sites were flooded in 1979 when the Tennessee Valley Authority completed Tellico Dam at the mouth of the Little Tennessee. Preservationists aided by Works Progress Administration (WPA) funds had reconstructed Fort Loudoun in the 1930s. Additional reconstruction was undertaken in the 1970s and 1980s, including moving the fort out of range of water which the dam would raise. After archaeological excavators located the foundation of the Tellico Blockhouse in the 1970s, they placed posts and fill to give visitors an idea of its layout. Both are now part of Fort Loudoun State Park.

U.S. Route 411 connects Vonore with Maryville to the northeast and Madisonville to the southwest. Tennessee State Route 72 connects the town with Tellico Village, Loudon, and Interstate 75 to the north. Tennessee State Route 360 connects the town with Fort Loudoun State Park and the rural areas at the base of the mountains to the south. The older part of town is situated along Depot Street and Hall Street, and includes many older houses, the library, the town hall and other municipal buildings. A more modern retail corridor spans most of the Vonore section of US-411. Some shops include Sloan's and Hardees, among others.

Vonore is located on the shores of Tellico Lake and is the location of two Tennessee State Historic Areas, Fort Loudoun State Historic Park and the Tellico Blockhouse State Historic Site. In addition, the Sequoyah Birthplace Museum, operated by the Eastern Band of Cherokee Indians, honors the life of the Cherokee scholar. Several swimming areas have been developed along the lake, including Vonore Beach along the lake's Creek Island Creek embayment near the center of town, and Toqua Beach just south of Fort Loudoun State Park. The Sequoyah Marina is located just off US-411, where the road crosses the lake.

Public schools in Vonore are operated by the Monroe County School System, and include:

All content from Kiddle encyclopedia articles (including the article images and facts) can be freely used under Attribution-ShareAlike license, unless stated otherwise. Cite this article:
Vonore, Tennessee Facts for Kids. Kiddle Encyclopedia.