Loudon County is a county located in the U.S. state of Tennessee. As of the 2010 census, the population was 48,556. Its county seat is Loudon.

Loudon County was formed on May 27, 1870, from portions of Roane, Monroe and Blount counties. Originally, it was named Christiana County, but a few days later the name was changed to Loudon in honor of nearby colonial-era Fort Loudoun. The fort was named for John Campbell, 4th Earl of Loudoun and a commander of British forces during the French and Indian Wars. In August 1870, the county officers were chosen. On September 5, 1870, the county court was organized at the Baptist Church in Loudon. This church became the temporary quarters of the county court until the new building, built by J. W. Clark & Brothers, was finished in 1872. Bussell Island, at the mouth of the Little Tennessee River, was inhabited by Native Americans for several thousand years before the arrival of the region's first European settlers. The Overhill Cherokee village of Mialoquo was located along the Little Tennessee near modern Tellico Village. Fort Loudoun was constructed by the British near modern Vonore in 1756, and was destroyed by the Cherokee four years later.

One of the earliest American settlements in what is now Loudon County was a river port and ferry known Morganton, once located on the banks of the Little Tennessee River near modern Greenback. Morganton thrived during the early 19th century, but declined with the rise of the railroad in the latter half of the century. The town's remnants were inundated by Tellico Lake in the 1970s.

Lenoir City is rooted in a plantation established by William Ballard Lenoir in 1810, which by the 1850s included a railroad stop known as Lenoir Station. The Lenoir City Company, established by Knoxville financiers Charles McClung McGhee and Edward J. Sanford, platted modern Lenoir City in the 1890s.

The town of Loudon began as a ferry and later steamboat stop known as Blair's Ferry, established by James Blair and his brother-in-law, John Hudson Carmichael, in the 1810s. The town changed its name to "Loudon" during the early 1850s, when it expanded following the arrival of the railroad. The railroad bridge at Loudon was one of eight bridges targeted for destruction by Union guerillas as part of the East Tennessee bridge-burning conspiracy in November 1861, at the outset of the Civil War. The bridge was too well-guarded by Confederate sentries, however, and the guerillas abandoned the effort. 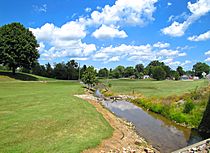 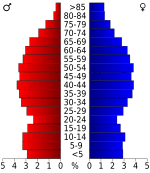 All content from Kiddle encyclopedia articles (including the article images and facts) can be freely used under Attribution-ShareAlike license, unless stated otherwise. Cite this article:
Loudon County, Tennessee Facts for Kids. Kiddle Encyclopedia.