The county is at the geographical center of the Great Valley of East Tennessee. Near the heart of the county is the origin of the Tennessee River at the union of the Holston and French Broad rivers.

Knox County was created on June 11, 1792, by Governor William Blount from parts of Greene and Hawkins counties, one of the few counties created when the state was still known as the Southwest Territory. It is one of nine United States counties named for American Revolutionary War general and first United States Secretary of War Henry Knox. Parts of Knox County later became Blount (1795), Anderson (1801), Roane (1801), and Union (1850) counties.

In 1783, an expedition into the Upper Tennessee Valley led by James White and Francis Alexander Ramsey explored what is now Knox County. White moved to what is now the Riverdale community in the eastern part of the county in 1785, and the following year constructed a fort a few miles to the west that would evolve into the city of Knoxville. Blount chose the fort as the capital of the Southwest Territory in 1790, and gave the new town the name "Knoxville" after his superior, Henry Knox.

Blount began construction of his house, Blount Mansion, in the early 1790s. The house still stands in downtown Knoxville. The Alexander McMillan House, built in the mid-1780s by Alexander McMillan (1749–1837), still stands in eastern Knox County. The Alexander Bishop House, built by Stockley Donelson in 1793, and a log house built in the same year by Nicholas Gibbs, both still stand in the northern part of the county. Campbell's Station, a fort and stagecoach stop located in what is now Farragut, was built by Captain David Campbell (1753–1832) in 1787. John Sevier established a plantation, known as Marble Springs, in the southern part of the county in the 1790s. 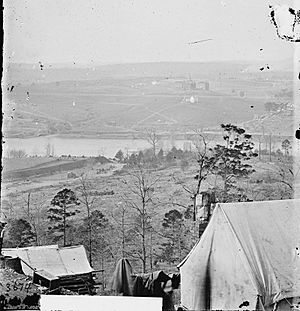 View from the south bank of the Tennessee River by Union photographer George C. Barnard after the end of the Siege of Knoxville, December 1863. Source: Library of Congress

Knox County's strategic location along important railroad lines made it an area coveted by both Union and Confederate forces throughout the Civil War. Since the mountainous terrain of East Tennessee was mostly unsuitable for plantation crops such as cotton, slavery was not as prevalent as it was in Middle and West Tennessee - an 1860 census of Knox County showed a population of 20,020 white citizens and just 2,370 enslaved African Americans. The lack of slavery combined with the vestiges of a once strong abolitionist movement in the region were two of the reasons that Knox County, along with much of East Tennessee, contained a great deal of pro-Union sentiment. In February 1861, 89% of Knox Countians voted for the pro-Union ballot in a statewide referendum on secession. On June 8, 1861, the county voted against Tennessee's Ordinance of Secession by a margin of 3,108 to 1,226.

Prior to secession, Unionists from Knox County collaborated with other East Tennessee Unionists in an attempt to secede from Tennessee itself and remain part of the Union. Oliver Perry Temple, a Knoxville lawyer, was named to a 3-man commission to appear before the General Assembly in Nashville and request East Tennessee and pro-Union Middle Tennessee counties be allowed to secede from the state. The attempt failed. Knox County joined the Confederacy along with the rest of Tennessee after the second referendum for secession passed in 1861.

With the success of Burnside's troops in the Knoxville Campaign, and especially during the decisive Battle of Fort Sanders, Knox County remained under Union control for the duration of the Civil War.

In the late 19th and early 20th centuries, Knox County played an important role in the quarrying and finishing of Tennessee marble, a type of limestone used in monument construction across the United States and Canada. Eleven quarries were operating in Knox County in 1882, and within ten years that number had doubled. Notable quarries in Knox included the Bond Quarry in Concord, an Evans Company quarry near Forks-of-the-River, and the Ross-Republic quarries near Island Home Park in South Knoxville. Finishing centers were located in Lonsdale and at the Candoro Marble Works in South Knoxville.

According to the U.S. Census Bureau, the county has a total area of 526 square miles (1,360 km2), of which 508 square miles (1,320 km2) is land and 18 square miles (47 km2) (3.4%) is water. The county lies amidst the Ridge-and-Valley Appalachians, which are characterized by long, narrow ridges, oriented northeast-to-southwest, alternating with similarly-shaped valleys. Notable ridges in the county include Bays Mountain, McAnnally Ridge, Beaver Ridge, Sharp's Ridge and Copper Ridge. House Mountain, at 2,064 feet (629 m), is the county's highest point, and is the focus of a state natural area.

The Holston and French Broad rivers join to form the Tennessee River in the eastern part of the county, an area known as "Forks-of-the-River." This section of the river is part of Fort Loudoun Lake, which is created by Fort Loudoun Dam several miles downstream in Lenoir City.

Cherokee Caverns is located 14 miles west of Knoxville on Highway 62. It was discovered in 1854 by Robert Crudgington who noticed fog emerging between rocks on his farm. He dug the entrance open and explored the cave. His daughter Margaret Crudgington opened the cave to the public in 1929 under the name Gentrys Cave, then changed the name to Grand Caverns in 1930. The cave has been open to the public, sporadically, ever since, under a variety of names. The name currently in use is Cherokee Caverns.

Indian artifacts located in the cave indicate that another entrance to the cave existed at some time in the past. 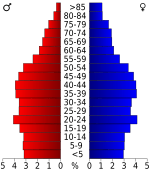 All content from Kiddle encyclopedia articles (including the article images and facts) can be freely used under Attribution-ShareAlike license, unless stated otherwise. Cite this article:
Knox County, Tennessee Facts for Kids. Kiddle Encyclopedia.