Powell is an unincorporated community in Knox County, Tennessee, United States. The area is located in the Emory Road corridor (State Route 131), just north of Knoxville, southeast of Clinton, and east of Oak Ridge. The United States Geographic Names System classifies Powell as a populated place. It is included in the Knoxville, Tennessee Metropolitan Statistical Area.

Despite its status as unincorporated, Powell is considered to be more of an "independent" small town than a suburb. One of the reasons behind this is that it was established in 1789 (two years before the establishment of Knoxville) by settlers passing through East Tennessee into the frontier. Among these early settlers was Stockley Donelson (1753–1804), a brother-in-law of President Andrew Jackson. Donelson's home, now known as the Alexander Bishop House, still stands on Bishop Lane. Another early settler was John Manifee, a Revolutionary War veteran who built a small fort and trading station along what is now Clinton Highway in the late 1780s. 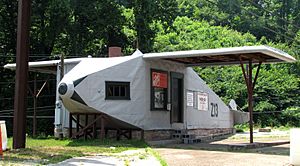 The community's name is derived from the Powell Station train stop, which was in turn named for Columbus Powell, a prominent local resident. The train station is not currently in use but remains in the town's "downtown" area. The railroad was essential to economy of early 20th century Powell as bricks were made with the mud from Beaver Creek and loaded onto the tracks and sent to various locations. The tracks were originally part of the East Tennessee, Virginia and Georgia Railway (now part of the Norfolk Southern line).

The influence of the Old South's culture can still be seen today in Powell, mainly by architecture. There are several Antebellum homes located along Emory Road and the original neighborhoods of Powell. Several of the older homes in the original part of Powell are believed to have been used as Confederate hospitals during the Civil War.

Powell lies in the Beaver Creek Valley between Copper Ridge and Beaver Ridge, two narrow ridges typical of the Ridge-and-Valley Appalachians. It is situated along Emory Road about halfway between Halls and Karns, and roughly spans the area between Interstate 75 to the east, and Clinton Highway (U.S. Route 25W) to the west. Knoxville lies opposite Beaver Ridge to the southeast.

Temple Baptist Church is a church located at 1700 Beaver Creek Drive in Powell.

The central action of James Agee's Pulitzer Prize winning memoir, A Death in the Family, takes place in Powell.

All content from Kiddle encyclopedia articles (including the article images and facts) can be freely used under Attribution-ShareAlike license, unless stated otherwise. Cite this article:
Powell, Tennessee Facts for Kids. Kiddle Encyclopedia.