Clinton is a city in and the county seat of Anderson County, Tennessee, United States. Clinton is included in the Knoxville metropolitan area. Its population was 10,056 at the 2020 census.

Prehistoric Native American habitation was not uncommon throughout the Clinch valley, especially during the Woodland period (1000 B.C. – 1000 A.D.) and the Mississippian period (1000–1550 A.D.). A number of such habitation sites were excavated in the 1930s and 1950s in anticipation of the construction of Norris Dam and Melton Hill Dam, respectively. The Melton Hill excavations uncovered two substantial Woodland period villages along the Clinch at Bull Bluff and Freels Bend, both approximately 20 miles (32 km) downstream from Clinton.

By the time Euro-American explorers and long hunters arrived in the Clinch valley in the mid-18th century, what is now Anderson County was part of a vast stretch of land claimed by the Cherokee. Although the Treaty of Holston, signed in 1791, was intended as a negotiation with the Cherokee to prohibit Euro-American settlement of the area including what is today Anderson County, the treaty became ineffective as more settlers moved through the Appalachian Mountains from Virginia and North Carolina into Tennessee. The earliest settlers in Anderson County included the Wallace, Gibbs, Freels, Frost and Tunnell families. The flooding of white settlers into the Indian domain was cause for several skirmishes, which eased after the Treaty of Tellico in 1798 (including an origination point for the land to be relinquished from the Cherokee being the Tellico Blockhouse) allowed for greater ease in settling the area.

Founded in 1801, the town of Burrville was named in honor of Aaron Burr, first-term Vice President under Thomas Jefferson. Land was selected and partitioned for a courthouse, and Burrville was designated as the county seat for the newly formed Anderson County. The county was partitioned from portions of Grainger County and Knox County in 1801; neighboring Roane County was also formed from a portion of Knox County in 1801, making Anderson and Roane counties effectively "sister counties".

On November 8, 1809, by act of Tennessee State Legislature, the town of Burrville was renamed because of the disgrace felt when Burr was charged with treason for conspiring with the Governor of the Louisiana Purchase, to form another country from part of the Louisiana Purchase and part of Mexico. The selection of the name "Clinton" was most likely to honor George Clinton or his nephew, DeWitt Clinton. George Clinton was one of Burr's New York political rivals who, along with Alexander Hamilton, destroyed Burr's bid for the governorship of the state of New York after his single-term Vice Presidency. George Clinton succeeded Burr as the second-term Vice President for Thomas Jefferson in 1805 (and also served as James Madison's Vice President, making Clinton the first Vice President to serve under two presidents and the first Vice President to die in office). Because of the political position of George Clinton as Vice President at the time of Burrville's name change, compared to DeWitt Clinton's position as the mayor of New York City, most likely the residents of the town of Burrville would have been more readily identifiable and more honorable toward George Clinton than DeWitt; therefore, it is most likely Clinton was named after George Clinton, barring historical proof. 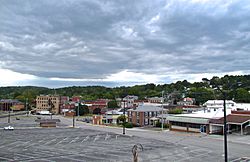 Clinton is surrounded by a series of long, narrow ridges that represent the western fringe of the Appalachian Ridge and Valley Province. Northwest of Clinton is Walden Ridge, the eastern escarpment of the Cumberland Plateau.

Clinton is concentrated around the junction of Tennessee State Route 61 and U.S. Route 25W. State Route 61 connects the city to Norris and Andersonville to the northeast and the community of Marlow and the town of Oliver Springs to the southwest, following a natural series of pathways through the mountain terrain. U.S. Route 25W connects the city to Knoxville to the southeast and Rocky Top and Caryville to the north. Interstate 75 intersects TN-61 northeast of downtown Clinton.

The climate in this area is characterized by relatively high temperatures and evenly distributed precipitation throughout the year. According to the Köppen Climate Classification system, Clinton has a Humid subtropical climate, abbreviated "Cfa" on climate maps.

All content from Kiddle encyclopedia articles (including the article images and facts) can be freely used under Attribution-ShareAlike license, unless stated otherwise. Cite this article:
Clinton, Tennessee Facts for Kids. Kiddle Encyclopedia.