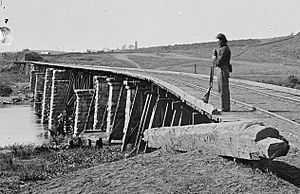 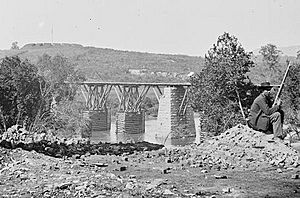 Strawberry Plains bridge with sentry and fort in distance

Strawberry Plains is said to be named for the wild strawberries that grew there in abundance when white settlers from North Carolina first arrived in the area. According to a history of the community written by local high school students circa 1935, the name Straw Plains was a shorthand name used by railroad porters and flagmen on trains that passed through Strawberry Plains, and that came to be used as the name of the local railroad depot and on some local post office postmarks.

Early in the Civil War, in 1861, the railroad bridge at Strawberry Plains was one target of Union sympathizers who aimed to burn several East Tennessee bridges to hinder Confederate military progress. The conspirators failed in their efforts to burn the Strawberry Plains bridge, but succeeded in their attacks of some of their other targets.

Through much of the 20th century, Strawberry Plains was the site of a Tennessee limestone quarry and an underground zinc mine. The zinc mine shut down in 2001, but reopened in 2006. In December 2008 it was announced that the mine would close again in February 2009.

In September 2007, the Tennessee Bureau of Investigation announced plans to build an office facility and crime lab in Strawberry Plains at Interstate 40 exit 398, having an estimated cost of more than $10 million. The 33,000-square-foot facility was completed in July 2009.

Exit 398 on I-40 at Strawberry Plains Pike has seen a increased amount of development since the 1990s. There are several hotels, restaurants and gas stations, with more under construction. With the increased growth around the interchange, the location has since been annexed into the City of Knoxville.

The Tennessee Department of Transportation administrative office for Region 1 is also located on Strawberry Plains Pike.

Plans for a mixed-use town centre in the Carter area of Strawberry Plains have been proposed by the Knoxville-Knox County Metropolitan Planning Commission to provide a community hub space for eastern Knox County as the area's population grows.

Strawberry Plains is home to a satellite campus of Pellissippi State Community College.

All U.S. routes, state routes in Strawberry Plains, along with I-40, are maintained by the Tennessee Department of Transportation (TDOT) in TDOT Region 1, which consists of 24 counties in East Tennessee. Streets, sidewalks, and greenways in the Strawberry Plains area are maintained by the Knox County Engineering & Public Works Department, the Jefferson County Highway Department, or the City of Knoxville Engineering Department for portions inside the Knoxville city limits.

All content from Kiddle encyclopedia articles (including the article images and facts) can be freely used under Attribution-ShareAlike license, unless stated otherwise. Cite this article:
Strawberry Plains, Tennessee Facts for Kids. Kiddle Encyclopedia.