Mascot is a census-designated place (CDP) in Knox County, Tennessee, United States. The population was 2,411 at the 2010 census.

Early 19th century settlement in the Mascot area may have centered on a ford across the Holston River that was known as Saylor's Ford. In 1838, Dr. George Arnold, a physician and planter, constructed a Georgian-style house known as "Chesterfield" along Old Rutledge Pike in what is now northern Mascot. The house is now listed on the National Register of Historic Places. In 1884 a railroad line was constructed through the area and a post office was established under the name "Meek," apparently the surname of a local family. 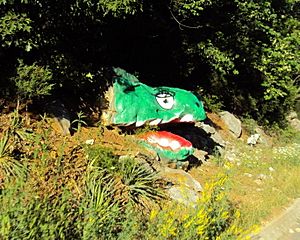 The Mascot community was formed in the early 20th century as a company town centered on the mine. The Holston Zinc Company established a mine locally in 1906, but some mining may have occurred earlier. The "Mascot" name is recorded from as early as 1904. Most suggest the community's name comes from an acronym for "Mining and Smelting Company of Tennessee," while others suggest it was the name of woman's lost cat. 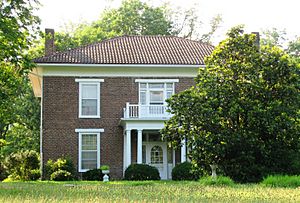 Mascot is home to a painted landmark known as "Turtle Rock," also known as Dinosaur Rock, Reptile Rock, and The Mascot Monster by locals and tourists. The painted imitation "turtle" rock can be found on Mine Road. This rock is considered an important part of the Mascot community and underwent renovation in May 2012, courtesy of two young locals, in response to vandalism.

There were 971 households, out of which 26.4% had children 18 and under living with them, 51.1% were married couples living together, 12.5% had a female householder with no husband present, and 31.0% were non-families. 26.5% of all households were made up of individuals, and 9.9% had someone living alone who was 65 years of age or older. The average household size was 2.48 and the average family size was 2.96. 12.1% of the population are veterans.

Mascot is the location of the Eastbridge Business Park, a 800-acre industrial park and federally designated opportunity zone. It is currently home to three large industrial facilities operated by Exedy America, Timken RBS, and Lifetime Products.

The community, while predominately rural, is considered to be the epicenter for zinc mining in Knox County, having been the site of a zinc mining industry for decades. as well several rock quarries near the Holston River.

Students in the Mascot area attend the following schools in the Knox County Schools district:

All content from Kiddle encyclopedia articles (including the article images and facts) can be freely used under Attribution-ShareAlike license, unless stated otherwise. Cite this article:
Mascot, Tennessee Facts for Kids. Kiddle Encyclopedia.