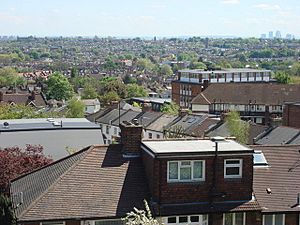 Urban Sprawl in the north of London

Urban sprawl is the name of a city growing in areas which have been unpopulated so far. This growth happens once the city has reached a certain size. In general, this growth also happens without regard for the planned growth, called urban planning. In the Middle Ages, there was the benefit of being protected when people lived inside the city. In modern times, there is no such benefit, and the only disadvantage is that it takes longer for people to get to the city center. People disagree about the exact definition of urban sprawl and how to measure it.

The term urban sprawl is a political one, and almost always has a negative connotation (usually that of the uncontrolled growth of a city).

All content from Kiddle encyclopedia articles (including the article images and facts) can be freely used under Attribution-ShareAlike license, unless stated otherwise. Cite this article:
Urban sprawl Facts for Kids. Kiddle Encyclopedia.