The Southern California freeways are a network of interconnected freeways in the megaregion of Southern California, serving a population of 22 million people. A comprehensive freeway plan was produced in 1947 and with construction beginning in the 1950s. The plan hit opposition and funding limitations in the 1970s and by 2004 some 61% of the original planned network had been completed. 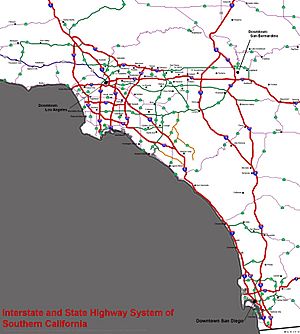 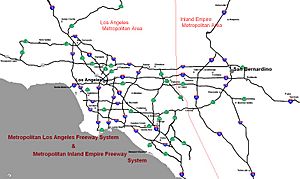 Southern California's romance with the automobile owes in large part to resentment of the Southern Pacific Railroad's tight control over the region's commerce in the late 19th and early 20th centuries. During his successful campaign for governor in 1910, anti-Southern Pacific candidate Hiram Johnson traveled the state by car (no small feat at that time). In the minds of Southlanders, this associated the automobile with clean, progressive government, in stark contrast to the railroads' control over the corrupt governments of the Midwest and Northeast. While the Southern Pacific-owned Pacific Electric Railway's famous Red Car streetcar lines were the axis of urbanization in Los Angeles during its period of spectacular growth in the 1910s and 1920s, they were unprofitable and increasingly unattractive compared to automobiles. As cars became cheaper and began to fill the region's roads in the 1920s, Pacific Electric lost ridership. Traffic congestion soon threatened to choke off the region's development altogether. At the same time, a number of influential urban planners were advocating the construction of a network of what one widely read book dubbed "Magic Motorways", as the backbone of suburban development. These "greenbelt" advocates called for decentralized, automobile-oriented development as a means of remedying both urban overcrowding and declining rates of home ownership.

Traffic congestion was of such great concern by the late 1930s in the Los Angeles metropolitan area that the influential Automobile Club of Southern California engineered an elaborate plan to create an elevated freeway-type "Motorway System," a key aspect of which was the dismantling of the streetcar lines, to be replaced with buses that could run on both local streets and on the new express roads. In the late 1930s when the freeway system was originally planned locally by Los Angeles city planners, they had intended that there were to have been light rail tracks installed in the center margin of each freeway (these would presumably have carried Pacific Electric Railway red cars), but this plan was never fully implemented.

During World War II, transportation bottlenecks on Southern California roads and railways convinced many that if Southern California was to accommodate a large population, it needed a completely new transportation system. The city of Los Angeles favored an upgraded rail transit system focused on its central city. However, the success of the Arroyo Seco Parkway, built between Los Angeles and Pasadena in 1940, convinced many that a freeway system could solve the region's transportation problems. Leaders of surrounding cities, such as Whittier, South Gate, Long Beach, and Pasadena, accordingly called for a web of freeways to connect the whole region, rather than funneling their residents out of their own downtowns and into that of Los Angeles. Pro-freeway sentiments prevailed, and by 1947, a new comprehensive freeway plan for Los Angeles (based largely on the original locally planned 1930s system, but without the light rail tracks in the median strips of the freeways) had been drawn up by the California Department of Public Works (now "Caltrans"). San Diego soon followed suit, and by the early 1950s, construction had begun on much of the region's freeway system.

By the 1970s, many cities in the United States, including Los Angeles, were experiencing widespread freeway and expressway revolts, there was significant political opposition The 1982 Surface Transportation Assistance Act mandated that a some 11% of the Highway Trust Fund should be used for mass transit schemes. The Century Freeway, which opened in 1993 following widespread community opposition, is likely to be the last freeway built using traditional funding.

Overall, only 61% of the freeway miles proposed in the 1954 master plan were built (as of 2004) with a number of key freeways left incomplete or unbuilt; the Long Beach and Glendale freeways were not completed and the Laurel Canyon and Beverly Hills freeways were never started. Other routes which presented expensive engineering challenges (e.g. the Angeles Crest and the Decker Freeways) were also dropped. The result was a system with gaps and bottlenecks. That is, many of the freeways that were actually built ended up with traffic levels far above their original capacity because planners had expected that traffic to be carried by other freeways that were never built.

By contrast, San Diego County is nearing completion of its originally planned freeway system and is using regional sales tax money to support various extensions and building new toll roads like State Route 125 to fill in the remaining gaps. The only major freeway not built was State Route 252 through Barrio Logan. Since the 1980s, nearby Orange County embarked on a program of tollway construction using local funds, and began to apply local financing to freeway construction as well after the turn of the 21st century with the passage and extension of Measure M.

Revival of interest in mass transit

After a deep recession in the early 1990s caused by the collapse of the defense industry at the end of the Cold War and the closure of naval bases, Southern California began to grow again in the latter part of the decade. As in many other cities with rapidly growing populations, the region's infrastructure has had difficulty in keeping up. Traffic congestion in Los Angeles is the worst in the nation, and has been the worst since at least the early 1980s. However, even in the face of the state budget crisis of the early 2000s, plans have been drawn up to radically expand the region's transportation network to accommodate population growth that has already swelled the region's population to 18 million (as of the U.S. Census of 2010) and may see it grow to 25 or even 30 million in the coming decades. Environmentalist sentiments, high fuel prices, and the dearth of available land may result in future development taking a pattern along the mass transit-oriented lines of the "smart growth" school's recommendations.

Beginning originally in the 1970s, a variety of factors, including environmental concerns, an increasing population, and the high price of gasoline, led to calls for mass transit other than buses. In 1976, the State of California formed the Los Angeles County Transportation Commission to coordinate the Southern California Rapid Transit District's efforts with those of various municipal transit systems in the area and to take over planning of countywide transportation systems. The SCRTD continued planning of the Metrorail Subway (the Red Line), while the LACTC developed plans for the light rail system. After decades, the wheels of government began to move forward, and construction began on the Los Angeles County Metro Rail system in 1985. In 1988, the two agencies formed a third entity under which all rail construction would be consolidated. In 1993, the SCRTD and the LACTC were finally merged into the Los Angeles County Metropolitan Transportation Authority which constructed subway lines and which today continues to construct new light rail and rapid transit lines.

Southern California residents idiomatically refer to freeways with the definite article, as "the [freeway number]", e.g. "the 5" or "the 10". This use of the article differs from other American dialects, including that of Northern California, but is the same as in the UK (e.g. "Take the M1 to the M25") and other European countries (e.g. "La A1"). In addition, sections of the southern California freeway system are often referred to by names rather than by the official numbers. For example, the names Santa Monica and San Bernardino are used for segments of the Interstate 10 even though overhead freeway signs installed at interchanges since the 1990s don't display these names, using instead the highway number, direction, and control city. A freeway 'name' may refer to portions of two or more differently numbered routes; for example, the Ventura Freeway consists of portions of the U.S. Route 101 and the State Route 134.

When Southern California freeways were built in the 1940s and early 1950s, local common usage was primarily the freeway name preceded by the definite article. It took several decades for Southern California locals to start to also commonly refer to the freeways with the numerical designations, but usage of the definite article persisted. For example, it evolved to "the 605 Freeway" and then shortened to "the 605".

Limited-access roads not maintained by the state

The following of Limited-access roads are not maintained by the state:

Major freeways leading into and out of Southern California

All content from Kiddle encyclopedia articles (including the article images and facts) can be freely used under Attribution-ShareAlike license, unless stated otherwise. Cite this article:
Southern California freeways Facts for Kids. Kiddle Encyclopedia.